A New Version Of Harriet The Spy 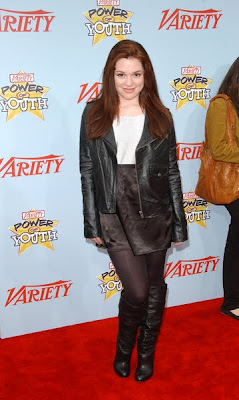 I met all sorts of familiar faces the December day I wandered onto the set of the new TV movie Harriet the Spy: Blog Wars.
Filming took place in Hamilton for exterior shots and in Toronto's west end in an unassuming TV studio I last visited to watch the filming of Ken Finkleman's last series At the Hotel (2006).
First of all there was talented Canadian director Ron Oliver whose domestic input includes The Hardy Boys (1995), Are You Afraid Of The Dark (1996), Goosebumps (1998), Amazon (1999) and Degrassi: The Next Generation (2006).
With such an impressive portfolio of hits it's no wonder the international market beckoned and it's also ironic he found himself back in Toronto for 9 Story Entertainment to fashion the Disney TV flick remake of Harriet The Spy.
He says the material grabbed him --the original movie was made in 1996 and what with cultural shifts desperately needed updating.
So here we all were on the last day of shooting and Oliver had time to make the last scenes just right.
For one thing in the original book Harriet used to confide to her diary. These days she's joined the computer generation and simply blogs away. But not like Gossip Girl, several set members hurriedly told me. I hope not --this is a TV flick for the tween set.
Oliver said something about the shoot going off so very well before setting up his next shot.
And then I was introduced to Alexandra Clarke who wrote the adaptation (along with Heather Conkie). Their challenge was to make the material more contemporary and still retain the uniqueness of the book. Or do young girls still act the same they did 40 years ago.
The idea was to gently satirize our culture, poke fun at it and celebrate teens' ability to survive in a society demanding so much of them.
In this version Harriet is a compulsive observer who ceaselessly blogs about the people and things she sees.And why shouldn't she? Her well meaning father Roger Welsch is a successful movie producer who is equally curious. However, he is so busy he has never had the opportunity to really get to know his daughter.
"He's just been careless as far as his daughter is concerned," says actor Doug Murray. "The scene you're watching shows him continually on the run and not able to give his daughter the attention she needs. That doesn't make him a bad dad, does it? He has a movie project he's desperately needed. So he runs after that."
And the scene I was watching has been done for its pure comedy visuals. It worked for me. Even Oliver laughed at the antics.
I also spied a familiar face as Harriet's mother, actress Shauna MacDonald--I first interviewed her for the 2000 CBC-TV series Those Arms Of Mine.
I remember we talked about her degree in Russian and how her CBC turn had survived the departure of the lead actor (replaced by Alex Carter) to become one of those shows that deserved a second chance.
Since then she's toiled in everything from Trailer Park Boys to Paradise Falls to more recent work on Republic Of Doyle and Being Erica.
I asked her about her look as Violetta Welsch, that particularly coiled hairstyle and the clothes that seemed so Park avenue but circa 1960.
"Women still dress this way. Women like Violetta,I mean. Her standing in the community means everything to her. The suit is ssential. But in the process she misses opportunities as a mother. Harriet needs her."
Down the corridor awaits the star of the movie the gorgeous and sweet Jennifer Stone. Born in Arlington, Texas, 1993 --she may look 16 but her mental age is more like 30. After all she's been acting since age 6. She'd much rather talk about taking time to go to university, she feels it would make her both a better person and a better actress.
Dealing with Toronto has been a blast. She's noticed speech differences and may yet wind up dropping in an "eh" into her conversation. But traveling to Hamilton was a novel experience to say the least.
Most of the time she's just been plain busy with her first movie lead. That's a big burden for any teenager to handle but crew members say she is unfailingly polite and eager to learn.
"I think young people will like the movie," she says. "It's not too heavy and we are all trying to have fun in between the work. I would like for there to be a sequel but right now I'm just interested in finishing the scenes and trying to explore this city."
And with that remark she was back at work after a hurried lunch.
And now it's time to check the results.
HARRIET THE SPY: BLOG WARS DEBUTS ON THE MOVIE NETWORK AND COMEDY CENTRAL THURSDAY MARCH 26 AT 7:15 P.M.
Posted by james bawden at 1:24 AM