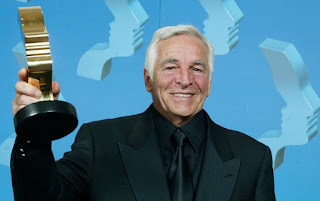 It was always a joy interviewing the Canadian TV star Donnelly Rhodes.
The Canadian TV star died Monday after a brave battle with pancreatic cancer.
We first met up  in 1973 when I was TV critic for The Spectator on the set of a fine but short lived CBC cop show  titled Sidestreet --Rhodes starred opposite a friend of mine Jonathan Welsh.
But there he was back in Canada because "I like to eat and I'm still bullish on Canadian TV. One of these days we'll get it right."
But  Rhodes and Welsh only lasted the first year--in typical CBC fashion the series got monthly makeovers before expiring two seasons later.
Rhodes was already a TV veteran--in the Sixties he'd been what he termed "a male starlet" on the Universal lot where he guested on such hit series as Marcus Welby, The New Perry Mason, Here Come The Brides.
"I even had a bit in Butch Cassidy And The Sundance Kid, blink and you miss me," he jokingly told me.
Rhodes, born in Winnipeg in 1937, had started his acting career at Canada's National Theatre School where he met and married the actress Martha Kathleen Buhs who took Rhodes' last name Henry.
"I then decided to use my middle name name Rhodes to further complicate matters. My brother Tim Henry is also an actor but he kept the original name..
Rhodes' biggest hit show was Danger Bay which ran for 122 episodes over five seasons (1985-1990).
"I enjoyed it tremendously. Loved those kids --Christopher Crabb and Ocean Helman. And we taught valuable ecological lessons. And it was always the number one rated series on the Disney channel."
There are rumors from time to time that the series may be rebooted as The New Danger Bay.
Other shows Rhodes starred in include The Heights (1992), Street Legal (as R.J. Williams), Da Vinci's Inquest (as Leo Shannon), Battlestar Galactica (Dr. Sherman Cottle).
The last credit I have for Rhodes is the TV series Legends Of Tomorrow in 2016.
I remember Rhodes once telling me: "I prefer working in my own country.  But sometimes this is not possible. I deliberately left The Young And The Restless because I feared I'd get lazy playing the same character day after day.
In recent years Rhodes battled cancer and died at Baillie Hospice in Maple Ridge, British Columbia.
"To be a working actor you must accept a lot of inferior assignments.," he told me. "But I treated each assignment with the same enthusiasm and intensity.  Then along will come a Danger Bay or a Soap and everything seems worthwhile again. I never courted stardom. To be part of an successful ensemble cast was always my goal."