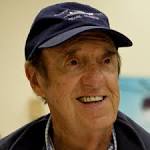 We lost a lot of great talents I'd interviewed in 2017. Here's my personal salute to some of them:
MARY TYLER MOORE I first encountered at the MTM Studios in 1972 during a rehearsal break on her award winning CBS sitcom. She said I could interview her as long as I did the ballet stretching exercises she did every lunch break! She died after decades of battling diabetes at 80.
RICHARD HATCH I first met on his series Streets Of San Francisco. And later I re-interviewed him on the set of Battlestar Galactica. He was 71.
BARBARA HALE I met in Toronto when she and co-star were making the first Perry Mason TV movie. She was 89.
RONY ROSATO I first knew in his SCTV days and later on Saturday Night Live. He was 62.
ADAM WEST I knew from TV guest appearances. He was far more than Batman, a great comedic actor, He was 89.
DELLA REESE I knew from various TV appearances. She said her life threatening aneurysm had been successfully operated on in London, Ontario. She was 86.
HEATHER MENZIES I knew from her TV series work but also as the wife of Robert Urich. She was 67.
MONTY HALL I met every time he came to Toronto for his Variety Village telethons but also at his Beverly Hills home. He was 96.
/
PEGGY CUMMINS I interviewed over the phone to promote the DVD rerelease of her terrific film noir classic Gun Crazy. She was 92.
ROSE MARIE I first met up at CFTO studios when she was a contestant on Definition. She was 94.
BRUCE GRAY I interviewed often--he was terrific in Traders and also Queer As Folk. He was 81.
JOHN HILLERMAN I met on a CBS press tour where he was promoting his star turn on Magnum PI. He was 81.
JIM NABORS I met at a winery in St. Catharines- he was headlining a variety show at Hamilton Place. He was 87.
ROBERT GUILLAUME I met on the terrific sitcom Sports Night. He was 89.
JOHN DUNSWORTH I interviewed for his terrific comedic turn on Trailer Park Boys. He was 71.
HUGH HEFNER I met and interviewed at the Playboy mansion where he showed me his vault of old movie classics. He was 91.
ANNE JEFFREYS I saw at an L.A.  party dancing with Cesar Romero when both were over 80. The star of Topper was 94.
I interviewed master character HARRY DEAN STANTON several times. He was 91.
DON OLMEYER I several times in his NBC production office where he showed TV critics the first preview of Seinfeld. He was 92.
JERRY LEWIS I interviewed at the CNE in 1971. He was 91.
DICK GEGORY I interviewed in 1970 as a summer student for The Globe And Mail while he was on a starvation campaign fighting racism. He was 84.
GLEN CAMPBELL I met on the set of The Tommy Hunter Show in 1972. He was 81.
EOBERT HARDY I interviewed several times most notably at CFTO STudios where he was starring in a drama about Winston Churchill.  He claimed he loved being in Agincourt. He was 91.
STEPHEN FURST I interviewed on the set of St. Elsewhere. He died at 63 of complications from diabetes.
ROGER MOORE I met when he was starring in the TV series The Persuaders. He was 89.
SKIP HOMEIER I met on a CBS drama and told him of his brilliance aged 12 in starring in the 1944 firilm Tomorrow THe World. He was 86.
MARTIN LANDAU I first met on the set of Mission: Impossible. He was 89.
I first  ROBERT OSBORNE. TCM host,  at an L.A. and we talked old movies on the phone several times. He was 84.
And I remember interviewing Shelley Berman on the set of a CHCH game show way back in 1971. He was 92.