Ice Bridge Is Worth Watching 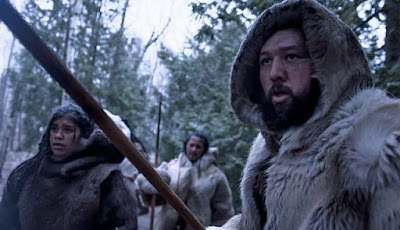 "I suppose more people will be watching," laughs veteran director Robin Bicknell whose compelling new documentary Ice Bridge premieres on CBC-TV's The Nature Of Things Sunday night at 8.
Bicknell spent 25 days over a longer period filming on location veteran archeologists trying to determine whether Ice Age peoples came to North America from Europe via a land bridge.
I watched the hour just before controversy enveloped the project via an incendiary story in The National Post.
"Actually. it's not very controversial at all," says Bicknell whose recent credits include the 2015 series
Battle Factory and the 2012 documentary Curse Of The Axe.
With Ice Bridge Bicknell merely follows the archeological evidence that highly trained Ice Age hunters termed Solutreans may well have migrated across a gigantic ice bridge from Europe to North America.
Solutrean tribes inhabited much of France and Spain 20,000 years ago and were responsible for the daring cave paintings that documented their way of life.
Whether or not they were an advanced sea faring people who could traverse the northern Atlantic  with its gigantic storm situations is another problem altogether.
"We show both sides of the argument," says Bicknell. Indeed, she gives the dissenters ample time to argue impassionately.
The thesis has been advanced for 20 years by American anthropologists Bruce Bradley and Dennis  Stanford.
We visit them on a monumental dig at Chesapeake Bay --nothing they've so far discovered has been demonstrated to the entire satisfaction of the academic community.
On this particular day we see them finding implements that could only have been made by Solutreans --the cure of the blade and the thinness are remarkably similar.
The archeological community has long been incensed by these rogue researchers ---we all know that there was a migration from Asia across a land/ice bridge during the last Ice Age of about 14,000 years ago.
Does that mean that Solutreans couldn't have reached North America's eastern shores?
"We cover those who are proper skeptic," Bicknell tells me. "Their opposition remains the dominant position.
She very deliberately did not give any time to any white racist theories emanating from the Solutrean theory.  She says the issue of racism is completely ignored which belongs to another documentary.
Bicknell's story is an developing detective saga --there's the discovery of charcoal fragments in the top soil which is carbon dated to about 20.000 years ago.
"We got there just in time as a big chunk of the cliff goes into the sea. Soon erosion will have entirely wiped out this important site."
Bicknell says the idea Solutreans were European is in itself flawed --their ancestors came from the Middle East.
One highlight has an elder in the Huron-Wendat people who brings 40 teeth to be analyzed and the marker haplogroup X was found in three of 40 samples.
Whether this proves they have Solutrean ancestors as against those who crossed the Bering Srrait  remains open for more debate.
Bicknell's documentary is filled with beautiful and dynamic images and has already caused robust debate. ahead of its premiere.
It may have provoked more controversy than she could ever have imagined.
But within the space of a TV hour it's jam packed with  enough human drama and academic passion to keep us all watching--and wondering.
ICE BRIDGE PREMIERES ON CBC-TV'S THE NATURE OF THINGS SUNDAY JANUARY 14 AT 8 P.M.
MY RATING: ****.