Canadian TV Is Alive And Thriving: The Caregivers' Club 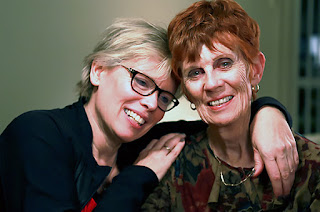 "There have been several touching documentaries on Alzheimer's victims," filmmaker Cynthia Banks is telling me on the phone.
But she wanted to look at the people who have to look after them often for long periods of time.
"My mother, Phyllis, started the ball rolling in 2016 when she phoned me for help. When I got to the hospital my dad was tied down to the bed and extremely agitated. And for the first time I watched this strong woman crying. She'd always been the most resilient in my family."
Thus began the journey that filmmaker Banks turned into the remarkable personal account The Caregivers' Club which premieres on CBC-TV POV Sunday night at 9pm.
Says Banks "We live in an increasingly aged population. More and more of us will wind up needing care but there just isn't the support system available.And the funding? Where will to come from?"
I first met Banks when she was a producer at The Journal.
And later she series produced that fine CBC-TV series Life And Times which I wish were still running, it was a fine piece of Canadiana.
Her last TV documentary was one of the year's best: 2015's Reefer Riches which accurately forecast the current Canadian debate over the legal marijuana issue.
"We should have sold that everywhere but documentaries about marijuana were a glut on the market right then. but people still want to talk to me about it."
Now comes the long anticipated The Caregivers' Club.
"You know I got frustrated thinking I'll have to get another mortgage on my house to finance it," she laughs. "But that's the harsh reality of the system."
As Banks studied the situation she found there are 25,000 new cases of dementia reported each year--there'll be a 66 per cent increase over the next decade or so.
"I know I was completely unprepared for my new role as caregiver. How mom had coped for a decade I simply do not know --she was amazingly resilient."
And Banks like all caregivers had to learn there was no turning back --the course of the illness is slow and resilient.
I'm not giving away too much by saying one of the primary caregivers dies during a much needed vacation.
That scene affected me most because until then there was hope in that particular story line.
Banks said it took her a long time to film the varying story lines. "I certainly didn't want to be intrusive. But the more I explored the topic the more I felt the need to continue filming.
"I can't think of a moment when I was asked to turn the camera off. Because by then the people I was profiling trusted me to do the right thing."
In The Caregivers Club we become friends with three outstanding caregivers--Dominic. Karen and Barbara.
"All three are connected to Baycrest Health Services in Toronto and the outstanding occupational therapist Nira Rittenberg is always there to offer her professional support. It's a remarkable program but not available to the many dementia cases in rural areas.
"My idea was to profile these stories over a year so I never knew what was going to happen. I was the observer--I simply hoped these people would mostly forget I was there.
The story of Welland caregiver Karen Gillespie and her husband Jack is remarkable--he was diagnosed with dementia in 2009--but it was Karen's resiliency that I found outstanding.
"I'm not sure this is the best one I've done. That's for you critics to decide, but it was the most personal and emotional.
"It was important to respect all these families and show their collective courage. And I hope I've done that."
And I want to add this personal plea from Banks: "Why aren't the political decision makers listening to the constituents and professionals who know that money has to be put into home care relief? We are in a caregiving crisis in this country. We must demand public policy that makes politicians listen to what is needed."
THE CAREGIVERS CLUB DEBUTS ON CBC-TV' SUNDAY JANUARY 14 AT 9 P.M.
MY RATING: ****.