The River Of My Dreams: A Portrait Of Gordon Pinsent 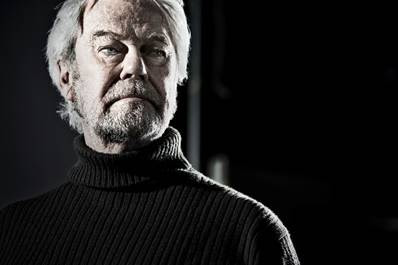 It's entirely appropriate Documentary Channel is presenting the brilliant new TV biography  titled The River Of My Dreams : A Portrait Of Gordon Pinsent on Canada Day at 8 p.m.
Because there never has been a more commanding Canadian icon than Gordon Pinsent.
Sure, there are other Canadian superstars out there but Chris Plummer and Donald Sutherland went away to gain their fame and fortune.
Pinsent stubbornly stayed behind except for a strange sojourn in Los Angeles making appearances on such TV series as Cannon and such flicks as Blacula.
Pinsent functions as his own tour guide of his life as he looks way backwards and reflects on the key players in his life.
There's the Dickensian poverty of his upbringing in Grand Falls, Newfoundland, and an education that did not get past Grade 8, an early interest in drawing and the determination to get off "the Rock" and find a better way of life.
Acting as the host of his own life there's Pinsent providing a running commentary and looking quite fit  at age 86.
Pinsent's anecdotes are priceless from the moment he convinced a Canadian immigration officer he had a job (he didn't) to his time in a Winnipeg dance studio as as instructor (who couldn't really dance).
In Winnipeg Pinsent learned the fundamentals of acting from the great John Hirtsch but moved to Toronto because it provided a bigger platform.
In Winnipeg Pinsent had married and had two small children who he left behind.
One of the best parts of this biography is meeting them as adults and seeing how that desertion affected them for years --but today they have reconciled with their wandering father.
In Toronto Pinsent met the incredibly talented actress Charmion King --I remember some of her dazzling turns at the Crest theater and I still think in terms of pure talent she was more than a match for Pinsent's easy going charm.
Contemporaries offering anecdotes include Chris Plummer, director Norman Jewison, R.H. Thomson and Mary Walsh among the younger generation affected by  Pinsent's presence.
One of the best things about this filmed portrait is its leisurely 88 minutes length that enables us to get deep into the Pinsent psyche.
I first met and interviewed him on the set of his CBC series A Gift To Last where the imported guest star Melvyn Douglas thanked Pinsent for treating him so well. But that's the way Pinsent treated all the actors working for him.
But I've always had this idea about a sequel to Pinsent's first series Quentin Durgens which nicely cast him as a Canadian M.P. I'd cast daughter Leah Pinsent as Durgens's daughter who takes over the seat and
gets involved in scandal which can only be resolved by her father rushing to the rescue.
Pinsent's own stories abnout encounters with Plummer at Stratford and Marlon Brando in the hills of Hollywood are rich.
Berman has stitched everything together seamlessly. The breadth of Pinsent's career is indeed remarkable.
But I wish there were a bit more details about the making of such Pinsent classic movies as The Rowdfyman and John And The Missus.
The finished film sports all the quality characteristics of those choice CBC-TV "Raskymentaries" --those long form profiles by Harry Rasky which used to flourish on CBC.
It does show that in so many ways Pinsent's journey was well worth all the emotional turmoil and heartaches.
Director Brigitte Berman has dedicated this remarkable profile to her husband Victor Solnicki who produced it and passed away on the day of the film's premiere at TIFF.
THE RIVER OF MY DREAMS PREMIERES ON DOCUMENTARY CHANNEL SATURDAY JULY 1 AT 8 P.M. REPEATED SUNDAY JULY 2 AT 1 P.M. ON CBC-TV AND AT 9 P.M. ON DOCUMENTARY.
MY RATING: ****.