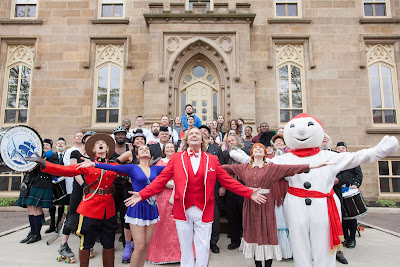 You can celebrate Canada Day early with Jonathan Torrens in the exceptional new CBC-TV  special Your Special Canada.
It premieres on CBC Sunday June 25 at 9 p.m. with a repeat on July 1 at 7 p.m. on CBC-TV. Got all that?
"It's a comedic valentine to the joys of being Canadian," Torrens is saying on the phone from his Nova Scotia home.
"I thought it would be fun to re-visit Charlottetown where I was born and where Canada was born in 1864."
Along the way Torrens invites a certain jaded politician named Sir John A. Macdonald to comment on the proceedings as he visits a maple syrup bunker in Quebec, soldiers stationed in the northernmost Canadian base of Nunavut (closer to Stockholm than Ottawa) and even dives into a gigantic butter tart for a socko finish,
"I think we covered a lot of territory --the intention was to show Canadian diversity," Torrens is saying. "There's a lot to be proud of in this country."
The last time I remember hearing about Torrens he was announcing farewell to a remarkable 10-year stint on the TV series hit Trailer Park Boys.
Torrens was nicely cast as the white rapper J-Roc. He says leaving was hard particularly since the series shows no signs of dipping in popularity.
"It's one of those Canadian TV hits that keeps on going" he says and certainly to be placed in the same category as Red Green, Corner Gas and the current comedy hit Schitt's Creek.
Torrens' work on TPB includes 10 seasons of TV episodes, three movies and two specials.
He also toiled as a director and writer on the series --it won a deserved Gemini as best ensemble performance in a comedy.
"I couldn't do anything more with the character," Torrens tells me. "But it was always a pleasure to be part of that company."
I first interviewed Torrens when he was fronting a talk show called Jonovision --I'm reminding him of the time the arranged for the first reunion of the cast of Degrassi.
It was the great reception these grown ups received that spurred interest in the revival of the series which lasted far longer than the original series.
I tell Torrens he should get an agent's fee for setting the groundwork.
Torrens' salute to the uniqueness of Canada ranges from a Zamboni race to a salute to the world's oldest drag queen all done in a light comedy style that's fresh and funny.
One of the highlights is a sweet and touching salute to aging drag queen, Russell Alldread (as Michelle DuBarry),  a proud Canadian, that shows how talented Torrens is as an interviewer.
The visit to the maple syrup vaults is amazing --all that liquid gold held in a gigantic bunker just in case there's another world wide shortage.
"Then we have a race between ice resurfacers --as they prefer to be called and what could be more Canadian than that."
At Toronto's Harbourfront Torrens asks such daring questions as who is the sexier Canadian-- Pamela Wallin or Pamela Anderson? A wrong answer gets a beaver tail in the face.
"We got in and out of Nunavut in 36 hours. It's the most amazing place."
And there's a cute Anne of Green Gables parody with Torrens as Jonathanne.
Mention must also be made of producer Lynn Harvey who was integral to the special right along.
Next Torrens is off to shoot the fourth season of Mr. D --he plays vice principal Robert Cheeley.
But I'm suggesting CBC look at Your Special Canada as a possible pilot for a new comedy series showing the breadth of Torrens's talent.
It's been a long time since CBC had a decent late night talk and comedy show. How about it CBC?
YOUR SPECIAL CANADA PREMIERES ON CBC-TV SUNDAY JUNE 25 AT 9 P.M. On CBC (REPEATED JULY 1 AT 7 P.M._
MY RATING: ****.
B
Posted by james bawden at 12:44 AM