Line Up To Watch The Taming Of The Queue 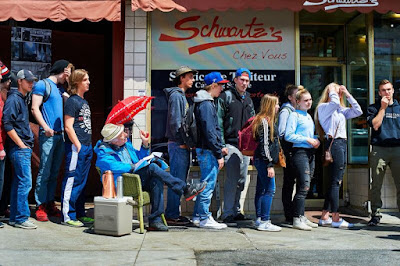 Familiar with all  those doomsayers out there predicting the decline and fall of Canadian TV?
I say tune into the brilliant new Canadian made TV documentary The Taming Of The Queue premiering Sunday night at 9 on the documentary channel.
It's worth lining up to watch.
Montreal Josh Freed has got it almost perfect in his funny and sad quest to show why most of us spend about two years of our lives lining up.
I naively assumed the subject matter would look at long lineups in the grocery stands as well lineups for concert tickets --and it does all that.
But there are also examinations of the traffic lineups that bedevil us if we live in a big downtown city.
And what about waiting on the phone for access to a bank manager? That's a lineup, too.
And the more I watched of this great documentary the more I realized I seem to spend a great deal of my day in lineups.
Getting a new passport was a hellish adventure in lineup waiting.
Then I waited in the subway to buy seniors tickets and there was another line to get on the crowded subway car.
Then I waited in Loblaws with my produce.
And I can't figure out why it has taken so long for a committed filmmaker like Josh Freed to tackle the subject.
Freed tells me on the phone he took about 18 filming days "because I basically knew what I wanted at the beginning."
But he had to travel to New York, London, Paris and even Mumbai  to show us how lining up is very different in different cultures.
"I blame it all on the French Revolution," Freed tells me and he's not entirely kidding.
Freed says queues first formed in revolutionary France because it was the egalitarian way to show all citizens of the republic were equal --no more special privileges for the aristocracy.
"But what truly surprised me was how the British seem to actually like queuing"
Again, it might be history --Britishers survived Dunkirk and the Blitz by queuing up --it became asmuch apart of the national culture as stiff upper lips.
Freed visits stolid Britons who queue up for leftover tickets at Wimbledon --one lady and her sister say they like camping out for days and would just hate it if the tickets were instead offered online.
Freed's interview with MIT professor Richard Larson is priceless --Larson's expertise has resulted in a nickname as "Dr. Queue".
Dr. Queue notes cases of "lineup rage" which have resulted in murder convictions.
Russians thought the line-ups outside Lenin's Tomb were awful --until the first Mcdonald's opened in Moscow causing day long queues for that Big Mac.
We visit with people who'll spend 48 hours trying to nab tickets for the next Saturday Live TV show.
Some nerds boast of waiting 18 days to get the first new iPhones --I wonder how they had eaten and slept?
Then Freed and his camera crew visited Mumbai an  "we nearly got crushed" trying to bard the railway.
"After a half dozen attempts I concluded it was impossible. And yet Indian friends do it every day, it's perseverance and experience."
About supermarket queues Freed discovers those who chose the "self service" line find it is slower than waiting in line for a trained teller who can really whiz through items.
And Freed thinks queues may be disappearing --you'll have to watch to see what he thinks is a big trend.
Freed's novel became the hit movie Ticket To Heaven (1981) "but I discovered Los Angeles was not for me. I wanted to do personal projects which are mostly is impossible on American TV.
"That's where the documentary channel comes in. It's one of the special parts of Canadian TV."
THE WORLD PREMIERE OF THE TAMING OF THE QUEUE IS ON DOCUMENTARY CHANNEL SUNDAY JUNE 18 AT 9 P.M. (REPEATED WED. JUNE 28 AT 8 P.M.
MY RATING: ****.