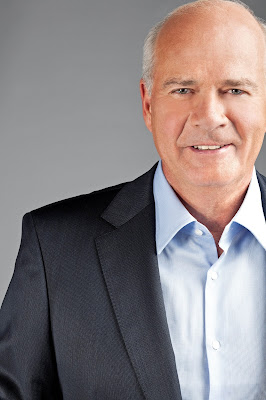 So there I was  was covering CBC-TV's fall launch in  September 1976 when the head of CBC news Knowlton Nash marched to the podium to exclaim "I've just lost my Mr. Clean!"
CBC news anchor Lloyd Robertson had just jumped to CTV as co-anchor with Harvey Kirck.
An hour later we all were up at CTV headquarters on Charles St.  for an impromptu press conference and in dashed Harvey Kirck who had been on a promotional tour of CTV western affiliates and was dubious from the star the idea of two anchors would fly.
Two anchors! Now that was new!
And now all these years later Peter Mansbridge who replaced Nash who replaced  Peter Kent who replaced Lloyd Robertson will bid adieu to the daily grind of anchoring the news on July 1. But he'll stick around the CBC for special assignments.
And I'm thinking Mansbridge may well be the last white guy to read thew news at CBC.
Don't forget Mansbridge succeeded Nash as The National anchor 29 years ago and the TV news landscape is vastly changed since then.
Back in Robertson's day that's all the anchor did --read the news.
It was written by others and if Robertson veered from the text the  unions hollered --after all Robertson was in the announcer's union and not considered a journalist.
CBC's The National back then was the leader in ratings and prestige.
Indeed I remember once when The Toronto Star'sTV guide Starweek was going to run a cover on all the competing news anchors and CBCrefused to let Mansbridge pose with his competitors saying CBC was that far ahead of the pack.
Starweek had the others including Robertson and Global's Peter Trueman pose in front of a TV set and a standard shot of Mansbridge was pasted into the picture.
When CBC moved The National from 11 p.m. where it daily outstripped CTV to 10 p.m. I argued this was a mistake and I still think was right.
At 10 p.m. CBC faced a plethora of top rated American hour long dramas and ratings never bounced back to the highs at 11 p.m.
I also argued CBC made a bad mistake in having two separate shows --The National followed by The Journal with separate hosts and separate teams that often covered the same events.
Several CBC vice presidents from Ottawa stormed into the office of The Star's managing editor to argue that I was anti-CBC but in the long run I think I was proved right.
Peter Mansbridge is still there but after Barbara Frum's untimely passing her replacements at The Journal including  Pam Wallin and Hana Gardner were both found wanting and Mansbridge emerged as the sole anchor for the entire hour.
Of course back in 1980 there were no all day TV newscasts.
I once asked Nash why the two national newscasts had always been at 11 p.m.
And he answered "Because that was the earliest film from Ottawa and Washington could be flown to Toronto headquarters to be processed.There were no live feeds until well into the 1980s. Anchors could only read the news --we were not allowed to voice opinions."
In recent years The National's traditional viewers on the old line CBC have been tanking.
Younger viewers now catch the broadcast on Facebook  or the CBC News channel.
That's why CBC is saying three anchors may replace Mansbridge and they may be stationed throughout the country rather than at CBC's Toronto headquarters.
When Robertson left CTV News he stayed at the network as host of W5. Similarly Nash hosted various TV series on CBC News Channel.
Mansbridge at 68 is the kid of that group and he's a valuable asset for CBC in whatever he choses to do.
And he doesn't hold grudges.
When I retired as TV critic at The Toronto Star Peter even popped into my retirement party and said some nice things.
And as I told him that night retirement is only part of a grand new adventure.