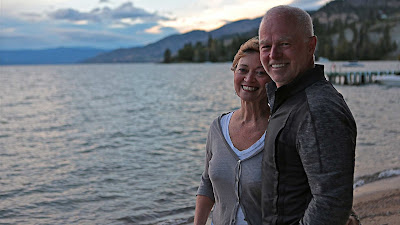 Wasted is a top Nature Of Things documentary that puts a face on the compelling subject of alcohol addiction.
You can catch it Thursday night at 8 on CBC-TV. Got that?
The hour begins with film maker Maureen Palmer's profile of her partner Mike Pond who was a psychotherapist helping people with addiction in Penticton, British Columbia.
And then he succumbed to alcoholism himself --living smack dab in wine country didn't help needless to say.
I'm not giving anything away by saying Palmer's approach is reasonable and compulsively viewable because Mike seems like such a well mannered kind of guy.
But this profile really acquires depth  when after being on the wagon for five years Pond starts drinking again --it just happened and despite all that he knew he could not stop it on that fateful day.
The impact on him is something awful but it also breaks Maureen's sunny resolve --she, too, appears from time to time but her steadfastness truly gets tested here.
The first time Mike had crashed it was with such a mighty thud it seemed he might die. Both of them knew another descent like the first might truly finish him off.
He'd wound up homeless on Vancouver's Mean Streets even pawning his computer to get another drink.
There followed two years of hell while he dried out in recovery hostels only to crash again.
The preferred treatment was with Alcohol Anonymous but like so many in that program Mike just couldn't make it stick.
He felt like a failure and couldn't rationalize why he kept slipping back into bad old patterns.
Maureen's film is invaluable for showing us there are effective alternatives.
Mike's road to discovery is what makes Wasted so compulsively viewable.
At Stanford University Mike meets with Dr. Rob Malenka a top scientist who studies how alcohol and drugs change the very nature of the brain's circuitry.
For example when mountain biking Mike would go up the hill with his bottle of Gatorade --and then when coming down he'd drink the second bottle of Gatorade laced with vodka.
Then it's on to Cambridge University  and Dr. Bianca Jupp and her impulsive rats and why they react as they do.
At the Medical University of South Carolina Mike gets strapped in a MRI --shown images of alcoholic drinks and non-alcoholic drinks --Mike doesn't think he is reacting much but the MRI shows differently.
Dr. Bill Miller of the University of New Mexico is very wise in arguing for different treatments for different people.
The stories of "shaming" at AA simply do not work for many of us. I was personally shocked at the high failure rate at AA which hasn't been publicized.
Right on camera Mike begins a different treatment plan. And nobody knows how long that may last --hopefully this time it will be forever.
The introduction of the personal story makes Wasted one to see.
Maureen even films herself trying to come to grips with Mike drinking again.
She has said in one interview returning to Penticton may have triggered impulses in Mike to drink again --but nobody really knows.
Wasted touches all the bases and Pond is remarkably brave allowing himself to be front and center showing both triumphs and momentary failures.
WASTED PREMIERES ON CBC-TV'S THE NATURE OF THINGS THURSDAY JANUARY 21 AT 8 P.M.
MY RATING: ****.