Jekyll And Hyde Back --And On CBC-TV! 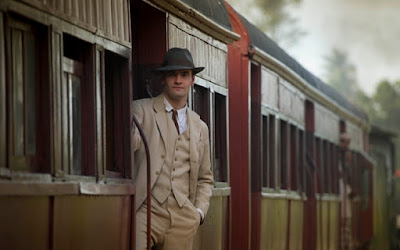 CBC-TV's biggest ever mistake?
It came on that fateful day in 1984 when former CBC president Pierre Juneau announced an all Canadian policy for his network.
Poof! In a season most foreign imports disappeared which meant U.S. shows like Dallas were dumped but so were all the quality British imports CBC used to feature like Brideshead Revisted.
Now comes a sparkling new British TV version of Jekyll And Hyde which brilliantly revisits the property and gives us his equally tortured grandson who has inherited both a fortune and a split personality.
You can catch it Monday January 11 at 9 p.m. omn CBC-TV. Got that?
One caveat: the nightmare sequences are well nightmarish and should not be viewed by young children under 12.
The CGI effects are wonderful but this is the kind of blood and gore that once would have earned a production a "Restricted" label at the cinemas.
For the rest of us the new Jekyll And Hyde is must see TV and the production "made in association with CBC" is a wonderful sign CBC is back in the market for international productions of high quality.
Check it out Mondays at 9 for the first hour episode.
The original novella was published in 1886 by Robert Louis Stevenson and this new Tv version is pretty wonderful on all counts.
Producer Charlie Higson (Fast Show) re-imagines everything from the perspective of Dr. Jekyll's grandson play enthusiastically by Tom Bateman.
The action starts in the 1930s in the British colony of Ceylon where the latest Dr. Jekyll is seen innoculating little ones except that one of the girls is threatened by a tractor trailer which he effortlessly lifts so she can wiggle to freedom.
Fast forward to a London of thick fog, rain swept streets and a pouty love interest in Lily (Stephanie Hyam) as Dr. Jekyll occasionally slips into the Hyde mode and nobody can figure out why.
Back in Ceylon his adopted father had pills to keep him tranquil but out on his own he's a veritable monster. Veins throb in the temple, he roars like a maniac and he becomes a muscular super hero.
Higson has been pretty loyal to RLS's main thesis but he's clearly having fun with the material.
For example RLS's lawyer Gabriel John Utterson can be seen in a wall painting --now the practice is run by son Max.
Seems that young Robert Jekyll has inherited all his grandfather's qualities.
And there's a government agency run by one of my favorite actors --Richard E. Grant --who tracks down the oddities of British society --and that would include young Dr. Jekyll.
One smitten British TV reviewer called it "Downton Abbey monsters" which it is all right.
What is not all right is the news ITV has already dropped it after one season of 10 episodes because of viewer complaints about the violence.
The TV audience was a huge (for British TV) 4.3 million the first week and just 1.8 million at the end.
So catch Jekyll And Hyde while you can.
JEKYLL AND HYDE PREMIERES ON CBC-TV MONDAY JANUARY 11 AT 9 P.M.
MY RATING: ****.