Great News: Schitt's Creek Is Back 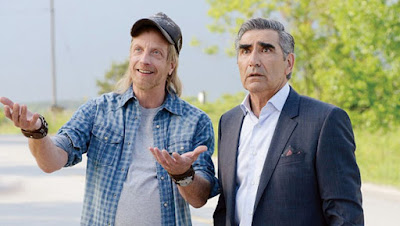 So far it's been a hitless season for new Canadian series with shows toppling all over the place.
So here's some great news: Schitt's Creek is back for season two.
You can catch the shenanigans on CBC-TV Tuesday January 12 at 9 p.m. Got that?
Think back --when did CBC last have a successful sitcom you actually wanted to see?
When I asked a neighbor she said "King Of Kensington!" Which is really stretching it.
And after the Al Waxman starrer left the air (because CBC refused to provide Waxman with a decent dressing room) it was a long drought with such stinkers as Not My Department and Mosquito Lake tossed our way.
CTV, of course, did have Corner Gas but subsequent efforts including Dan For Mayor and Hiccups just didn't do it for viewers.
With Schitt's Creek it's funny and has a fine cast. What more do you want?
The co-creators are Eugene Levy and his very bright son Dan Levy and the one camera show they've created reminds me somewhat of Paradise Falls. Remember that great one?
This one has the same style as Green Acres as Eugene Levy and Catherine O'Hara brilliantly cast as billionaires who lost everything after a decade of not paying taxes.
So the government has seized their mansion and they find themselves in a rural backwater subsisting at a seedy motel.
The humor here is completely deadpan --without these two veterans from SCTV the whole thing simply would not work.
But they're not playing for laughs to an unseen audience --the lack of a laugh track is an enormous advantage here.
The first new episode is a real scream as Moira (O'Hara) discovers her grandmother's antique crocodile leather bag has gone missing --only then does she also discover son David has also gone.
Just as funny is Annie Murphy as self absorbed daughter Alexis who is having an on/off relationship with the neighborhood vet while also running around with a hunky electrician.
And don't forget Emily Hamphsire as the motel clerk Stevie who wants to get out of town just as much as anybody else.
However did the show's creators get Chris Elliott involved?
He's perfectly cast as the town bumpkin turned mayor of the hamlet named after his father.
Nothing ever happens on Schitt's Creek but everything changes allthe time.
Dan Levy wrote the first new script but he's aided immeasurably by cagey veteran director Jerry Ciccoretti who used to direct some of the best Canadian TV movies around (before Canadian TV gave up on TV movies).
By the way I've watched three additional episodes and each one is better than the last.
And for the very first time this season I've found a Canadian  series that's must-see TV.
SCHITT'S CREEK RETURNS TO CBC-TV TUESDAY JANUARY 12 AT 9 P.M.
MY RTATING: ****.