747: The Definitive Guide Is Just That 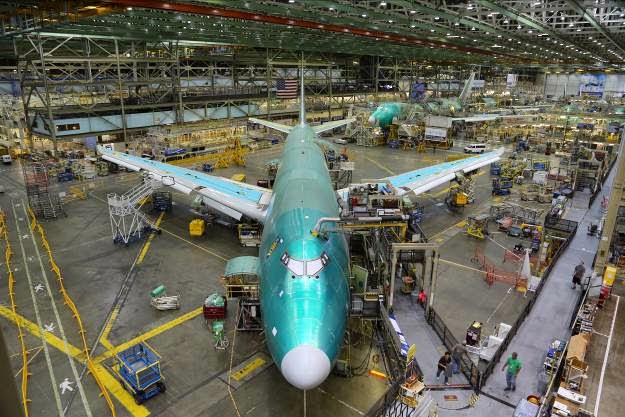 This is going to be a blockbuster of a Sunday with new and returning TV series busting out all over.
But save some time --the best of the night is surely Discover Channel's 747: The Definitive Guide which premieres Sunday Sept. 28 at 8 p.m.
I'm trying to remember the first time I flew on a 747.
It was in June 1972 when I was on a TV critics junket.
The first portion was held in New York city and then it was on to L.A. --in a 747.
I remember one of my fellow columnists muttering "It can never fly....too big."
But it did and half way through the trip I remember TV host David Susskind venturing down from first class to chat up the press.
Since then the 747 or Jumbo Jet as we called it has dominated the skies.
And enough of the plane's original engineers are still around albeit older to remember all the bumps in the creation process.
The archival footage is absolutely enthralling: we get to visit Boeing's original Everett plant outside Seattle --it was the size of 65 football fields.
The tail that was being built was six stories high in itself.
I didn't know the project was a joint venture between Boeing and then aviation giant Pan Am.
We see how the various components were designed and then mass manufactured --Col. Mark Tillman was at controls for the first test flight.
There was no engine mighty enough to lift such a behemoth --Prattt and Whitney had to re-design all that was known up to then in airline engines.
In February 1989 there was a near accident of monumental proportions narrated by surviving air stewardess Laura Brentlinger when a faulty cargo door ripped open on takeoff starting a two engine fire that would have disabled any other airline.
What follows is a scary recreation --much of the story would later turn up in all those Airport movies.
I believe with the thesis advanced here that the 747 revolutionized air travel.
we also get to visit inside the flying White House 747 --on the day of 7/11 it helped secret President Bush away from potential terrorist attacks.
As one of the engineers says "The world is smaller" which is mighty true.
We also see the snug compartment where the stewardesses sleep on long flights --I never knew these existed.
What dates the first planes are the atrocious color schemes --that awful orange had to go. No, really!.
Of course there are other jumbos around these days including the 787 Dayliner.
And the 747 was such a gas guzzler it is no longer the airiner of choice I'm thinking.
But as one survivor of a famous 1971 near miss says "The 747 saved lives."
747:THE DEFINITIVE GUIDE PREMIERES ON DISCOVER SUNDAY SEPT. 28 AT 8 P.M.
MY RATING:****.