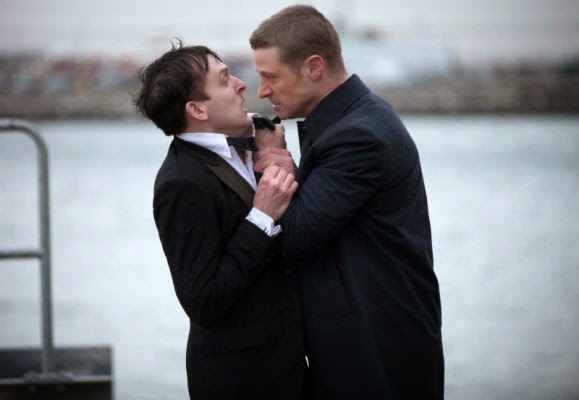 I have a big problem with the first new TV hit of the Fall 20124 TV season.
Gotham's hour long pilot which revs up on CTV Monday night at 8 is so good it's difficult to imagine that kind of near perfection on a weekly basis.
The best TV pilot I ever saw was for a long forgotten show called Tenspeed And Brownshoe.
All the money was invested in the pilot and the series had nowhere to go but down.
This one is a prequel to Batman with the recreation of Gotham so stupendous you'll wonder what kind of a budget creator Bruno Heller had to work with.
The story line takes place 20 years before the Batman story we're all familiar with --here Bruce Wayne is a scared 12-year-old played winningly by David Mazouz.
He sees his parents killed by a vicious hood but is somehow spared.
Then onto the bloody scene come Detective James Gordon (Ben McKenzie) and  veteran Det. Harvey Bullock (Donal Logue).
Logue by the way is scene stealing brilliant, reason enough to tune in weekly.
Others include treacherous Fish Mooney (Jada Pinkett Smith) who has as one particular buddy, vicious Oswald Cobblepot (Robin Taylor) who 20 years on will re-emerge as "The Penguin".
But the biggest star as far as I'm concerned is the sumptuous recreation of Gotham --it's all shadows and rainswept streets and takes place somewhere in the near past.
The cars seem somewhat Seventies as do the fashions but no matter when this is a cesspool of sex and sadism.
Did I mention the time --at 8 p.m., an hour that once was called "the Family hour" is all wrong for the sheer stylized brutality of Gotham?
The bloody Wayne murders are the central plot line of the first hour which is seeped in film noir traditions.
And, yes, there is a Catwoman (Camren Bicondova) but here she's only 14, glimpsed as she scales fire stairs and looks down from towering heights.
So how do we know she'll eventually emerge as Catwoman?
Because she's already stealing milk to feed cats all over town.
Poison Ivy? Here as played by Clare Foley her name has been rearranged as Ivy Pepper.
And Edward Nygma  (Cory Michael Smith) is a young forensic scientist for Gotham's police department although eventually he'll morph into The Riddler.
Jada Pinkett-Smith's character Fish Mooney is a new character created especially for this series and supplying the requisite warped glamour.
Gotham signals a huge change in programming for Fox.
Conventional TV networks are being challenge by cable networks and Gotham would normally be running on a cable weblet.
And the production company is Warners which means profits down the road in terms of DVD boxed sets a syndication won't be flowing into Fox coffers.
There area lot of Batman fans out there but is that enough to turn Gotham into a huge enough hit to offset its pricey production costs?
I remain hopeful. This one is dramatically challenging and a real treat to watch
The Batman franchise has made billions in profits.
But here we have a Batman show without Batman and Robin at all.
But at 8 p.m. it may be too early in the evening for die hard Batman fans.
GOTHAM DEBUTS ON CTV AND FOX MONDAY SEPT 22 AT 8 P.M.
MY RATING: ****.