How To Get Away With Murder: A Must See 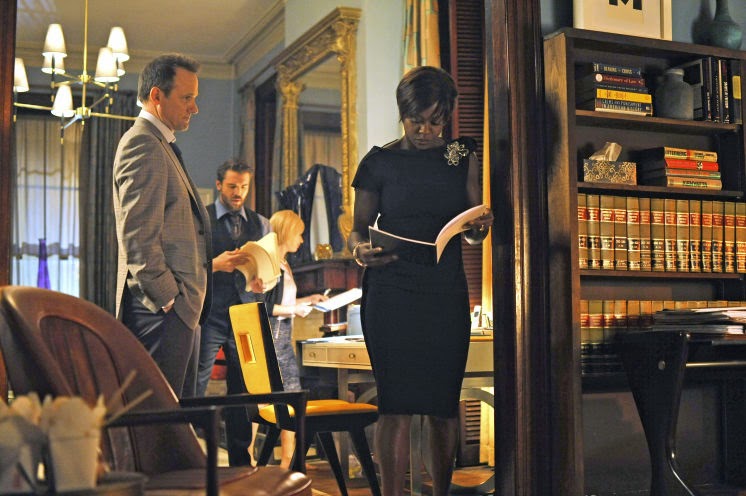 Thursdays at ABC this fall is best described as "Shondra Land."
As in Shondra Rhimes who has three back-to-back hour dramas: the venerable Grey's Anatomy, last year's hit Scandal and the new Viola Davis vehicle How To Get Away With Murder.
Grey's and Murder are both simulcast on CTV which has so far bought up the season's first two new best bets (Monday's Gotham was the other one).
But Murder is only executive produced by Rhimes --she didn't actually create it --credit goes to her protege Pete Nowalk..
But the well made legal show has many of her hallmarks: it is superbly cast and sports a strong ensemble cast.
And the story line is adult for a network series with doses of violence and sex usually reserved for cable series.
I'm not giving away much by stating the first scene has legal students trying to stash a battered corpse in the woods.
Yes, it does have the strong ensemble playing always insisted on by Rhimes.
But front and center there's Oscar nominee Viola Davis as a acerbic law professor and practicing criminal attorney, a woman always beautifully dressed but messy inside as she shouts down students or stares at a presiding judge who disagrees with her.
The first hour fairly whistles by with its taut energy --it's like a never ending chase movie, superbly shot and edited with nary a dull second.
But will viewers want weekly doses of a strong, black attorney who always seems to be right even when she's wrong?
Anyone out there remember the Steven Bochco series Murder One which dazzled with similar energy but ultimately failed to retain its audience on a weekly basis?
In order to attract Davis ABC had to agree to only 15 episodes the first year which is hardly what a new series aiming to attract weekly fans needs. Other networks will be offering 22 new episodes.
There are two mysteries in the first hour. Davis's character Annalise is defending a secretary who may have tried to killer her boss/lover by switching aspirin for his heart medication. And there's the disappearance of a college student whose corpse is found in one of the college residence's water tanks.
As the first hour unfolds the focus shifts to the callow students and then the story isn't quite as much fun.
That's because Davis with her acting chops sucks all the oxygen out of her scenes giving just enough glimpses of her character to suggest this professor is very much a flawed personality.
However Alfred Enoch (Dean in those Harry Potter movies) is a real comer, Matt McGorry is compelling as the smarmy classmate. Aja Naomi King as the ambitious one and Karla Souza as the quiet one are definitely worth watching.
With all its trickery, quick cuts and flamboyance How To Get Away With Murder will certainly grab your attention.
But will it be enough to compel you watch the next week is what I'm wondering.
HOW TO GET AWAY WITH MURDER PREMIERES ON CTV AND ABC THURSDAY SEPTEMBER 25 AT 10 P.M.
MY RATING: ***1/2.