So there I was Monday evening watching the second installment of the best new American TV series.
And it's 9:59 and the telephone rings.
A constant reader of this column has the same question in her mind as has been bothering me all night.
And our conversation goes like this:
She "I just finished the next part of The Roosevelts and it's bloody brilliant."
Me: "I'm feeling the same way."
She: "And you know my inevitable question: Why can't Canadian TV compete with this?"
Me: "It's not that simple. the Canadian commercial networks don't want to compete. They'd rather spend $700 mil on imported American shows, run these at the same time as the U.S. webs and get huge commercial dividends."
She: "Yeah, I know that. And I'm not above catching NCIS when I'm in the mood. But I want to know why CBC or TV Ontario don't do quality long forms anymore."
Me: "Well, CBC is dissolving before our eyes. When I started as TV critic at the Hamilton Spectator in 1970s CBC gave Canadians The Tenth Decade (the Diefenbaker-Pearson years), Pierre Berton's The Last Spike, such miniseries as Laurier and Riel.
"Then there was the brilliant nature series This Land and John and Janet Foster's nature specials, and don't forget venerable Front Page Challenge which  imported everyone from Lord Mountbatten to Martha Mitchell to CBC's uptown studios. Every season CBC had a live broadcast from Stratford and later Shaw. They even commissioned their own operas and ballets.
"Even CTV had a handful of Canadian TV movies every season.
"All have disappeared as the dry rot set in on Canadian culture."
She: "Maybe we just don't have talent like Ken Burns who made The Roosevelts?"
Me: "The talent has always been there.  The wacky way Canadian content works means American shows always get pride of place in Canadian TV schedules."
She: "Why no series on the Trudeaus or on the Mulroney or Chretien years?
Me: "CBC had things planned but the money is no longer there. The private networks won't touch such things. Remember that CBC-TV flick on Don Cherry? It only made one foreign sale: to Finnish TV. The rest of the world is just not that into us."
She:"Will current CRTC hearings on Canadian content help?"
Me:"Nope. CRTC is responsible for the current malaise. Both Liberal and Tory government have slashed and burned at CBCand the CRTC remained quiet. TVOntario has marvelous BBC imports but lacks the financial where with all to make its own miniseries."
She: "So you're suggesting?"
Me: "Watch and savor PBS's The Roosevelts while you can. It is truly great TV." 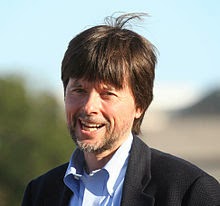