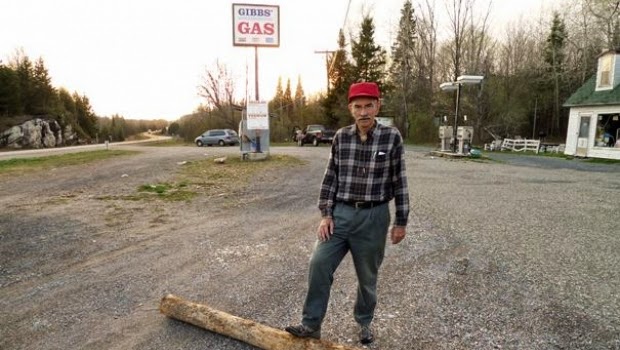 Depressed about the current state of Canadian TV?
May I suggest as a quick pick-me-up the beautifully realized new TVOntario documentary The Lost Highway premiering on TVO Wednesday April 23 at 9 p.m?
The fact it is so good just doesn't surprise me at all.
That's because it's the work of veteran documentary film makers Derreck Roemer and Neil Graham who won the Gemini for direction for their last documentary Last Call At The Gladstone Hotel.
"We were lucky then in hooking into a narrative that unfolded in a special way," Graham (or is it Roemer) is saying --I interviewed the partners on the telephone and couldn't always distinguish between the two --they sometimes finish each other's sentences.
In Last Call they documented an attempt to transform the aging Victorian relic Toronto's Gladstone Hotel which turned out to be so thorough all the former tenants of the upper floors could no longer afford to live there.
In Lost Highway they examine nostalgically a part of an iconic Ontario highway --Highway Seven --that has deteriorated with the decades and is now a seldom travelled backwater.
They claim they're lucky again but both times it's far more than luck.
Roemer and Graham have a knack of latching onto true characters who first surprise us with their sheer individuality and then cause us to be concerned about their future.
I know a lot about Highway 7 having spent summers in the Havelock-Marmora area in the Fifties when it was an extremely busy and bustling through fare from Toronto to Peterborough to Smith's Falls to Ottawa.
"No more," says Graham.
For one thing travellng habits have changed and an outing these days to the nation's capital might take the average family along the 401 to Kingston and then up to Ottawa.
So Highway 7 has been depopulated into dilapidated motels that seem right out of Psycho and deserted farm houses that speak of another era.
Everything changes seems to be the moral of this story and to illustrate it Roemer and Graham have found some deliciously odd ball characters along the route.
There's the nostalgic senior Howard Gibbs who is never short of words.
His family (beginning with his father) have owned Gibbs Gasoline for 80 years. In the early days the big oil companies vied to build gas stations and install state-of-the-art pumps.
These days Gibbs gas needs a new lining in the underground tank before it can re-open for business.
And most drivers these days prefer traveling from Peterborough to Ottawa without a break.
Gibbs is the ex-warden of Frontenac county, a melancholiac at heart as he talks about a way of life that has vanished.
Daughter Melanie is trying to revive the station but wife Hope is never seen --she's moved out to nurse a neighbor--and it seems like she'll never return..
"We wanted to interview her but she declines," Roemer says.
At one point Howard goes missing for days. Suicide? Murder? Melanie says he went away with another woman.
Neighbors David Draski and wife Linda Tremblay have their own set of challenges as they try to repair a crumbling farmhouse into an elegant bed and breakfast called Nomad's Rest.
Arden's last remaining retailer (profiled here) is batik artist Sarah Hale who closes down for the winter because business is so scarce.
The village  actually has a name --Arden -- it used to be a bustling center of the logging industry with three general storers all of which have closed. The few villagers left prefer shopping these days in the larger town of Madoc.
The Lost Highway has that great capacity to surprise. One ends up caring about these great individuals and wanting them not merely to survive but flourish.
And because Lost Highway runs on TVO Roemer and Graham have an elongated 58 minutes to tell their story (CBC documentaries run 44 minutes).
A story this well made deserves to be savored --here is Canadiana at its best.
THE LOST HIGHWAY PREMIERES ON TVONTARIO WEDNESDAY APRIL 23 AT 9 P.M. (REPEATED AT MIDNIGHT AND SUNDAY APRIL 27 AT 11 P.M.)
MY RATING: ****.

I interviewed the film-makers as well for a review in our local paper, which includes the Village of Arden in its distribution area, and when I went to write it up I also didn't know who had said what.
I can say this, though, they certainly captured those two characters, Gibbs and Dashke - they really are like that.
Jeff Green
Frontenac News

Found this on TVO by accident. Now I'm wondering what happened to all these people. The estranged B&B couple, what happened to the dilapidated house he bought? Is the B&B gone? Is the Gibbs Gas sign still there? It's true, nobody really wants to stop along that stretch, except in Madoc or Perth or any larger centre. This film is true Canadiana, a real story not just national mythology. It's a spread out country and it's always been hard to make a living in certain places.

25 years ago when I lived in Ottawa we would take that highway instead of the 401 back to Burlington. It was a scene out of deliverance then.

That Gibbs guy was portrayed as a piece of work not a nice fellow at all.

The B&B hmmmmm, he seemed to lack understanding of the fundamental requirements. Not sure what he thought was going to turn the town around draw people in to a tourist stop without a tourist attraction or restart the economy without any industry to generate revenue.

Anyway ya I got sucked into the stories that was great.

Gibbs Gas is still there, and still closed. I passed by it on my way back from Tweed on Sunday. I've never heard of the Nomad's Rest before now.

Nomads Rest (the B&B) is still open, and a lovely place to stay.

That is sad. Me and a few friends rented cottage from The Knight family for many years about 25 years ago. We user to go into Arden and the place was bustling. I remember the pond in the middle of the town with a diving board. The kids use to swim their and have a great time. Also at the time it had one of the last Popshops in extistence. Good memories.

Just watching this literally at this moment and it made me look into the town and community.

If I could ever find information on the Nomad's Rest in Arden then I would book a trip and check out the area.

Found the website for www.nomadsbb.com and yes, Linda still runs it.

Only a few hours from Toronto and we plan to go to Arden on the May long weekend.

Please do more of these documentaries.

Aw, I missed the show and now can't find it online. Going to stay at Nomad's Rest next wknd - it looks gorgeous!! Linda was great to talk to on the phone.

Ack! I need some of those Ronson Flints!


I'm planning to spend a few days during a week in July in the area. I just watched the doc for the third time last week. Does anyone know the current status of the Nomad's Rest b&b & whether or not it's open? Or the nearest motel to Arden? I'd like to meet Howard as we share a similar nostalgic past. My family owned a Gulf station in the early '70's In southern BC on a highway known as The Hope-Princeton Highway. It's hwy #3 and called the Crow's nest Highway. If anyone can help with info on Nomad's, Arden or Howard I'd greatly appreciate it. Thank you.