Letterman Will Be Missed 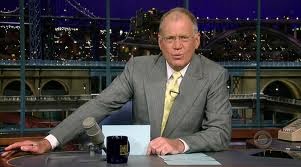 Thursday night on his CBS Late night talk show seemed just another show for David Letterman.
Until he announced he's retiring sometime next year.
"We don't have the timetable precisely down" Letterman told his stunned audience.
I've been covering Letterman since his days as host of NBC's late late night show that followed Johnny Carson.
In fact Carson's company produced Letterman who was always seen as the logical successor.
Except by NBC powers who turned around and picked Jay Leno precipitating a Letterman walk out that only ended when he was allowed to jump ship to CBS.
Who was the winer in that tense stand off I often wondered. Leno proved the ratings king but Letterman had Carson on his show every time he went out to California --Carson never would appear on Leno for anything.
I covered both Carson and Leno in my four decades as TV critic for The Globe And Mail, The Hamilton Spectator and for the last 28 years with The Toronto star.
That doesn't necessarily mean I ever met them on a person-to-person basis.
I once sat beside Carson at an NBC lunch --he was there because his production company was making a sitcom pilot with Angie Dickinson.
He was supposed to chat up visiting TV critics but was clearly uncomfortable by the whole business.
Another time I spent a day behind the scenes at Carson's Tonight offices hanging out with legendary director Fredddie De Cordova.
At a certain point Carson slipped into the seat next to me in Freddie's office and made a few comments and then disappeared again.
"Johnny's like that," Freddie said.
With Letterman I had even less contact.
The only time he appeared before TV critics was when he jumped ship in 1993 to CBS. He was polite but distant, took some questions and then left the stage.
His show was always off limits to visiting TV critics when they happened to be in New York. I did have lunch once with his Canadian side kick Paul Shaffer but even he could not get me on the set.
Letterman survived 32 years in a time slot that can be unforgiving on most comedians.
His upscale chatter and that twinge of negativity gave him a die hard audience. Stand up was something he did every night but it wasn't foolish talk that he peddled.
Letterman survived quadruple bypass surgery in 2000 --but his surgery had hardly mellowed him.
In October 2009 he was the victim of a bizarre  blackmail scheme that he publicly disclosed to a shocked audience.
I think it will be tough for him to let go. Carson intended to go on to other things but found he couldn't do anything else the way he had controlled Tonight.
Letterman has given us a deadline of about a year before we finally say good bye to him.
Who'll be his successor? One CBS wag told me he thought it might be --get ready for it --Conan O'Brien.
But another CBS source says Chris Rock, Craig Ferguson and Jon Stewart are top candidates.