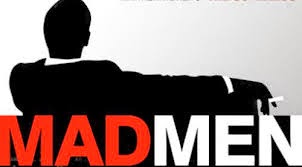 I have to admit the first new episode of Mad Men's truncated season (just seven episodes) was , well, pretty disappointing.
First of all Don Draper had nothing much to do. Still considered an ad genius he's at home but still getting paid.
Peggy was supposed to have taken over but she is still working for a man and desperate;y trying to please.
Don is reduced to the ads from Playboy and squiring his wife around L.A. while she tries to get a gig on Bracken's World on NBC.
Don only heated up on the return flight to Manhattan when he sat next to an attractive wodow played by a suddenly mature Neve Campbell.
Pete already out in L.A. is sun tanned and dippy.
Roger has a cautious reunion with his daughter before heading home to the next orgy.
Nothing much happened at all. Is this the kind of must-see TV we're used to or is the series finally showing its age?
I think a lot of viewers out there agreed with me as MM drew its lowest ever ratings with 1.1 million fewer viewers than watched last June's season finale.
I feel splitting the season into two bits a mistake. And frankly there are other shows around that are fresher and better written.
MM never did attract the ratings of a Walking Deadat the best of times but its sluggish return is a cause for real concern.
Or are we just that much through with Don Draper, we know him too well, and his swings into drinking and dalliance are no longer surprising.
I just hope the quality bounces back next week.