Who The Hell Wrote It? 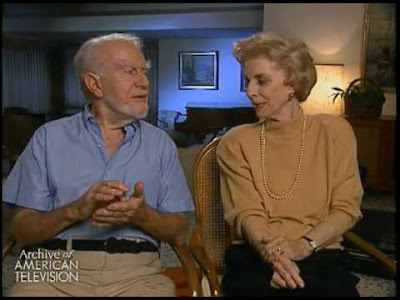 I remember way back when I was on my first TV critics tour in Los Angeles and some nerdy publicist was going on and on about the new sitcom he was promoting.
And the legendary TV critic of the San Francisco Chronicle, Terry O'Flaherty, who'd been covering the beat since 1948, yelled out "Who cares what stars you've got lined up. Who the hell wrote it?"
It was good advice in 1971 and 40 years later it still works.
I was thinking of Terry's line when I read the very scant obituaries for Madelyn Pugh Davis.
She was 90 when she passed and had been out of the business for more than two decades.
Who the hell was she?
Only one of the co-creators of TV's most enduring art form, the sitcom.
Davis, her writing partner from radio Bob Carroll and writing colleague Jess Oppenheimer teamed up to create I Love Lucy in 1951.
The threesome wrote all 39 episodes every year until 1955 when Bob Schiller and Bob Weiskopf joined them. Then Oppenheimer dropped out in 1956 to go on to other series.
I met Davis and Carroll at a press party at Lucy Ball's house in 1972 I reckon. By that time Lucy had stopped making I Love Lucy in 1957, resumed production in 1962 with The Lucy Show and then started yet another "new" series Here's Lucy in 1968.
And 16 years after I interviewed them they were back at it for the short-lived Life With Lucy, one of the biggest ever TV flops --it lasted all of six weeks.
Davis explained she'd originally met Ball when called to write for the new CBS radio comedy My Favorite Husband in 1947 --the stars were Ball and Richard Denning.
When Lucy decided to jump to TV she wanted real life husband Desi Arnazi to be there with her and the threesome cooked up a new situation that cast the redhead as a Manhattan housewife and Bill Frawley and Viviian Vance as their downstairs neighbors.
"Writing for radio was ever so much fun," Davis sighed. "We could go anywhere --not sets were required just the listeners' imaginations."
Carroll said the TV show was originally going to go live as with all other comedies at the time like two other CBS shows: Burns And Allen and Jack Benny.
Davis said "Lucy insisted on an audience so we had to install bleachers inside the studio. Desi wanted it filmed for the rerun potential and Desilu had to cover the additional cost per episode."
Davis said her forte was the premise with Carroll and Oppenheimer supplying the gags. She was the one who invented such classic situations as the one finding Lucy and Ethel on a chocolates assembly line and to keep up they start swallowing chocolates.
Did she enjoy writing for the most famous sitcom of all time? "No! I was always worrying if I had an idea for the next episode. We only got 13 weeks off and we spent most of that time batting around ideas for the next season."
So the question remains who invented Lucy Ricardo? The writers or the comedienne?
When Ball started up The Lucy Show in 1962 Oppenheimer sued to for earnings claiming he was one of the co-creators of the show and despite the name change it was still Lucy Ricardo as he'd originally envisaged the character.
He won his case and so bitter was the feud Desi Arnaz never even mentioned him in his autobiography A Book which was all about the creation of I Love Lucy.
I later saw Davis and Carroll on another sitcom where they were listed as executive producers but really were fine tuning each script: Alice. It took real skill to change a Martin Scorsese women's picture into a sitcom and the show with Linda Lavin lasted nine seasons.
In later years I much preferred interviewing the creative writers many of whom on TV series were listed as executive producers: Aaron Spelling (although I often hated his shows), Steven Bochco, David E, Kelly right up to today's Matthew Weiner.
And I'm still asking "Who the hell wrote it."