So What Happened To Television? 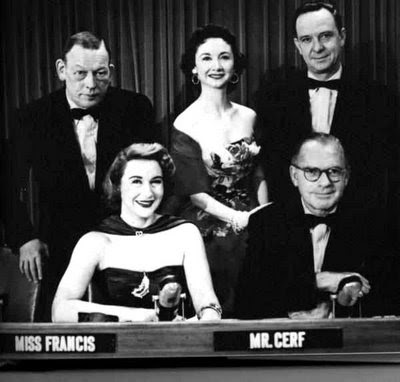 A few months back a charming university student stopped me in the frozen foods section of our neighborhood market to pose this provocative question
"So Whatever Happened To Television," she said.
I knew exactly where she was heading.A few weeks earlier she'd asked me if there was a quick way to understand the cultural history of TV.
And I told her to use You Tube to call up all the mystery guests on that old CBS game show What's My Line which ran on CBS Sunday nights at 10:30 from 1950 to 1967 when it was cancelled --it survived in syndication for years afterward.
And she did just that, becoming addicted to these fuzzy clips (only kinescopes survive because the program was live).
She watched the passing parade in complete astonishment: Eleanor Roosevelt, Bishop Sheen, Salvatore Dali, Frank Lloyd Wright, Henry Cabot Lodge, Louis Armstrong, Bette Davis, Eddie Cantor, Jimmy Durante, Ava Gardner, Jane Russell, Fabian, Henry Fonda, Jimmy Stewart, Jimmy Cagney, Fredric March. Gary Cooper, Talullah Bankhead, Margaret Sullavan and hundreds more were among the luminaries who tried to trick the panelists.
The panelists included regulars Arlene Francis, Dorothy Kilgallen and Bennett Cerf plus semi-regulars Fred Allen, Steve Allen, Orson Welles, Tony Perkins and Tony Randall.
The conversation was literate, always witty and often stimulating.
I wish she could see CBC's Front Page Challenge the same way but CBC keeps those old shows under lock and key. I just feel the Corp is embarassed how great Canadan TV once was.
Celebrities in those days dressed up. They could actually talk in complete sentences.
So what happened?
Well, in those days not everybody owned a TV set. So the networks deliberately put on fare ranging from live dramas to concerts to get people to buy their first set.
And after she was finished the student tuned io the fare of today. Reality shows starring numbskulls nobody has even heard of. News programs where racist remarks are screamed out.
The more channels there are the lower the form of entertainment offered.
Back in TV's Live Era there were no reruns which were considered an insult to the average TV watcher.
No network would dare run something as literate and sophisticated as What's My Line these days.
TV has become junk food for the masses, she said.
And do you know what? Sadly she's right.
Posted by james bawden at 2:12 AM