TV Debates: Is There Ever A Winner? 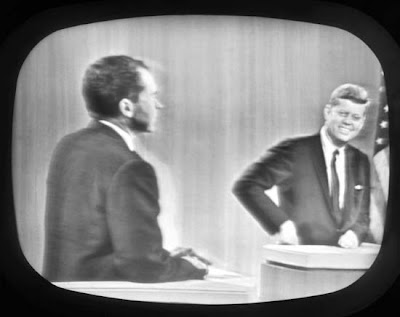 It's strange how TV debates have crept into the Canadian political landscape.
There I was a Carleton U J-School student and I was in former Prime Minister John Diefenbaker's Commons office asking him about the value of media debates.
"Don't believe in them," he snapped and glared at me. In his world the very notion of televised debates was somehow "unCanadian". Remember in those days --it was 1970 --even debates in the House of Commons were not televised.
Of course as Diefenbaker noted with a wink debates had gotten Abraham Lincoln elected president but the actual crowds at these events were relatively small compared to the majority of Americans who had to read all about them in local newspapers.
The great contemporary U/S. presidents tended not to debate --for F.D.R. or Dwight Eisenhower to even acknowledge the opposition would have been something.
Then came the Kennedy-Nixon debates of 1960 which I certainly watched livea nd in blazing black and white.
Kennedy's tan won the debates or so it was said. Nixon's five o'clock shaddow gave him a sinister hue.
But it really was Kennedy's wit and sparkle whereas Nixon had to spend his time defending the flagging Eisenhower administration.
Kennedy's successor Lyndon Johnson simply would not debate at all. I can't remember Nixon and Humphrey debating in 1968.
But these days U.S. leaders have to have a series of debates --if one pulled out there'd be political hell to pay.
In today's very changed media circles I don't think debates have much of an impact.
Or do they? When Mulroney shot at John Turner "You could have said no" regarding pork barrel appointments I think he zoomed into the political lead.
But we now see our leaders in action every day in the Commons. They're familiar faces, we know their platform. Today debates seem a case of once is too many.
All three leaders had been rehearsed, puffed and fluffed--I don't think John Diefenbaker ever wore makeup--until they seemed like waxwork dummies.
Harper looked at the camera the whole time and never said anything original. Ignatieff played the Harvard don, too smart by half. Layton got in the best digs but he has zilch chance of forming a government.
It was boring, predictable TV.
But. hey, it's democracy even if John Diefenbaker had it right 40 years ago: if we watched TV's House of Commons intently ever day as we should be doing there'd be no reason for a TV debate at all.
Posted by james bawden at 4:01 PM