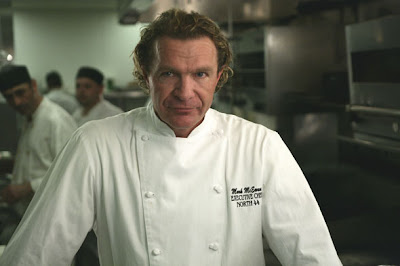 "I'm ready. It will certainly be a good series."
Toronto star chef Mark McEwan is on the line to promote his latest series Top Chef Canada which starts Monday April 11 at 9 p.m. on the food network.
I've seen a clips compilation and it certainly looks exciting as 16 chefs from across Canada battle it out for prizes that include $100,000, a GE Monogram kitchen valued at $30,000. Plus, of course, all the acclaim accorded Canada's official Top Chef.
How did McEwan get the gig --he's already super busy at his Toronto restaurants.
"Well, they asked and I liked the concept." One article quotes him as saying he won't become a culinary Simon Cowell.
But he insists he won't be a patsy either.
"First thing we separate the real chefs from the actors. All submitted videos and there was some acting, yes, but I was also impressed by others."
The Canadian spin off sticks closely to the American original although there may be some uniquely Canadian dishes.
I'm reminded of the time I asked Julia Child her favorite Canadian dish and she blurted out "Pea soup I guess!"
I have this feeling Canadian dishes as served by these young chjefs will be above that!
The clips I watched showed the arrival of the chefs from all parts of the country --from Calgary there arrived two female chefs who knew what to expect of each other.
In true Reality TV tradition we saw them at work in their local surroundings and heard what motivated them to want to venture to T.O. and go against the nation's best.
First up McEwan pulls a fast one by ask all to fillet a fish in five minutes and the results veer from satisfactory to simply awful.
Then it's on to see how many artichokes they can pare in five minutes --the look on some faces is priceless.
Another highlight: they must all ruin off to the latest Loblaws and get the ingredients needed for their signature dish --then back in the studio they have half an hour to cook everything to perfection.
"Good people are always hard to find," McEwan says."Training is the most important, everything adds up. And it must work on television."
McEwan laughs when I suggest he throw a few pots and pans around for effect but I know that's so unlike his image.
"We have a shortage of good cooks right now. Some are just not very good. They must be honest, that's important. A good cook can always find a great job even in this market."
In the elimination process 100 were initially chosen and then it was winnowed down. McEwan was in on the final selection. Filming concluded months ago --it's the intense editing that seemed to take forever.
"Ego is a great thing but it's more than that. I'm pretty touch." In one scene McEwan complains swallowing the portion "is hard to do".
"I call it as I see it. That's basically the show, delivering at the end."
As head judge McEwan tried for the utmost professionalism, keeping individual histrionics to a minimum. "The format was something we tried to keep at all times. But there are some great surprises."
McEwan owns and runs North 44, Bymark and ONE restaurants and acquired his TV experience as host of Food Network's The Heat.
"It's simply a showcase of good cooking, it works and is exciting."
TOP CHEF CANADA PREMIERES MON. APRIL 11 AT 9 P.M.
Posted by james bawden at 10:51 PM