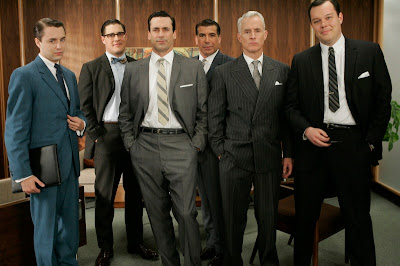 There's good news and bad news about Mad Men, arguably American TV's finest current series.
AMC which makes the show in Los Angeles has admitted the series will be stalled and won't return for Season Five until early 2012.
I've been hearing various stories which say there was an impasse between the brilliant creator and writer Matt Weiner and the cable network which was worried about spiraling costs.
Mad Men up to now has always debuted on AMC in August as a respite from summer's battery of reruns.
AMC sources have been quick to dispute recent news stories that the show is somehow finished,
"We are getting a later start than in years past due to ongoing, key non-cast negotiations. Mad Men will be back for a fifth season in early 2012."
Some industry analysts are saying the weblet will proceed with or without Weiner who certainly has always been the heart and soul of the brilliant drama.
One source says Weiner has been offered $30 million to stay with the series as show runner which would make him among the highest paid talents in the industry.
The series and Breaking Bad have made AMC a contender in the upscale cable TV drama sweepstakes and both series have the Emmy awards to provie that.
But ratings wise Mad Men gets very small numbers precisely because AMC is a discretionary weblet without the audience pull of a CBS or NBC.
Canadian viewers are already getting stymied because after CTV declined to renew the series up here there have been no other Canadian takers --I'm hearing the price per episode is considered too high for a show that debuts in the summer doldrums.
Anyhow I'll be missing Mad Men this August,
And I'm wondering how it will fare come 2012 when the competition at that midseason junction is already something fierce.
Posted by james bawden at 12:02 AM