The Event Is Back 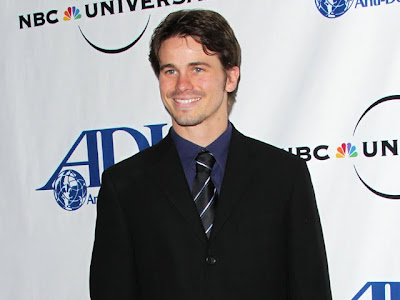 If you've been watching NBC shows over the past few weeks you'll have noticed all those ads telling us The Event is coming back.
Just what exactly is "the event" has not as yet been explained.
When I sat down last fall to sample all the new series I thought the Event was about as good as it gets.
And so did NBC which poured vast amounts of dough into its ad campaign.
And it's not as if nobody watched. The Event initially drew strong numbers only to have viewer interest trickle away in succeeding weeks.
The plot is another conspiracy thingy starring Jason Ritter --looking exactly like late great father John --as Sean Walker who stumbles into this nationwide mystery after the disappearance of his pert girlfriend Leila (Sarah Roemer) during a Caribbean cruise.
Over at the White House Blair Underwood channeling Barack Obama as President Elias Martinez must deal with the problems of a group of detainees kept at a far away Alaskan camp. They are led by freedom fighter Sophia Maguire (Laura Innes).
Sturdy national security chief Blake Sterling (Zeljko Ivanek) completely disagrees with the decision --he knows more about this situation than viewers do.
Think Lost. Think Flashforward. Or The 440. Or V. The intial conception of The Event as a meandering strand of two separate stories that rarely meet became a turn off for potential fans.
Conspiracy stories on TV go right back to The Fugitive. This story wastold almost entirely in retroversions and later episodes will offer flashbacks to "solve" some of the plot questions.
Reviewing the first episode which was titled I Haven't Told You Anything was next to impossible because NBC hadn't really told us anything.
I think "potential" was the word I spotted in so many of the initial reviews. And as the ratings began seeping away NBC panicked and put the show on hiatus. Which is better than cancellation,right?
Now NBC has sent out review copies of the first two new episodes. The series is taut and exciting in places, still confusing as all out heck in some scenes.
So far acting honors go to Blair Underwood as the recently elected president (here a child of Cuban refugees) and he becomes our guide through the mysteries of this terrific story.
If Underwood is all cautious diplomacy Ivanek is a real pepper pot of a security adviser (possible based on vice president Cheyney). He sees conspiracies everywhere and even gets to battle the baddies in a vicious gunfight inside the secret alaskan compound.
Also adding dramatic clout is Virginia Madsen as the new senator from Alaska who has inherited the seat from her late husband, a veteran of sex terms. She suspects something isn't right at the containment center.
Strong acting also comes from Scott Patterson as Leila's father and Clifton Collins Jr. as an alien turned guerrilla.
In a telephone conversation with TV critics Ivanek laughed off suggestions he is having a terrific career playing a wide assortment of extremely creepy characters. I think he said something like it keeps him busy. It also keeps him scene stealing right and left.
On the same call Underwood said, sure, it was strange continuing to work on a series nobody was really aware of. He supported NBC's decision to reboot the show in the New Year and said the network had promised to run the series for nine weeks straight without any pre-emptions.
That way there's the hope momentum can be carefully built. To get into the series one must have patience and a long memory --this is one series not designed for casual viewers.
Technical details including cinematography and a spectacularly staged stunts are up to the standard of any current movie hit.
Now all The Event needs is adequate viewer support to be picked up for a second event. That and some explanation sooner than later what "The Event" really means.
THE EVENT PREMIERES ON CITYTV SUNDAY MARCH 6 AT 9 P.M. AND ON NBC MONDAY MARCH 7 AT 8 P.M.
MY RATING: ***.
Posted by james bawden at 10:31 PM