Why Did Paul Gross Do It? 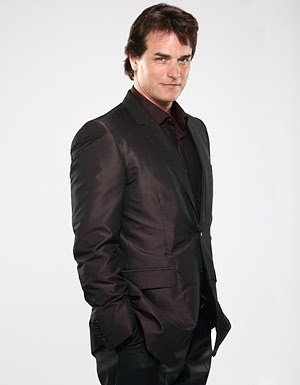 Biggest mystery of the current TV season remains this burning question: Why did Paul Gross jump to U.S. TV?
I've been trying to figure that one out since I previewed the pilot of Gross's new series Eastwick. To say I was disappointed with the show would be an understatement.
On paper the ABC series must have looked great. It was a spin off from the Jack Nicholson movie hit The Witches Of Eastwick and Gross got the Nicholson part of the horny ole devil.
But something changed in the movie from screen to TV. The movie isn't that well remembered but it had a certain quotient of naughty suggestions namely the one that had Jack romancing and bedding three nubile lovelies in the shapes of Michele Pfeiffer, Susan Sarandon and Cher.
But on TV it came out as a slightly stale reworking of Desperate Housewives.
Now comes the press report ABC is "declining" to order any more episodes of the show after it hits 13 hours. And fans are properly incensed.
It will leave the plot just hanging there. The TV version follows the antics of Rebecca Romijn, Lindsay Price and Jaime Ray Newman but the cast apparently heard of the cancellations in the trade papers.
Executive producer Maggie Friedman told EW "None of us can believe this is happening.We do not get a chance to wrap things up in a bow. Which is killing me."
Excuse me but other ABC series received pick up orders more than a month ago. Eastwick's ratings have been terrible to put it mildly so why the surprise?
The biggest mystery is the affable and talented Gross's decision to particip[ate in the first place. He usually has a key eye for quality material.
In recent years he has emerged as Canadian TV's "Captain Canada".
Let's pause to reconsider Gross's thriving Canadian TV career.
I first interviewed him on the set of the 1988 miniseries Chasing Rainbows along with two other unknowns Michael Riley and Julie Stewart.
Getting Married In Buffalo Jump (199) got him noticed but then he defected to Disney for the dog awful flick Aspen Extreme (1993).
Then came the CBS-CTV series Due South (1994-1999) as Constable Benton Fraser whch made him a big TV star. I once went out to the set to interview him and he was busy writing dialogue --he was that talented.
The came Canadian movie hit Men With Brooms (2002). A more ambitious recent movie Passchendaele (2008) did not get U.S. distribution which I know disturbed him.
And several hit Canadian miniseries followed: Slings And Arrows (2003-06) and Trojan Horse and sequel H20 (2008-2009).
Gross was creator, executive producer, script writer --the whole shebang. And a lot of deserved critical praise followed plus public popularity.
I've learned CBC nixed yet another sequel to H20 causing the Gross defection to the U.S.
So my point is this: If Canadian TV can't retain such a talent then maybe there is not future for home grown talent, right?
Posted by james bawden at 7:23 PM