Life Is A Life Saver 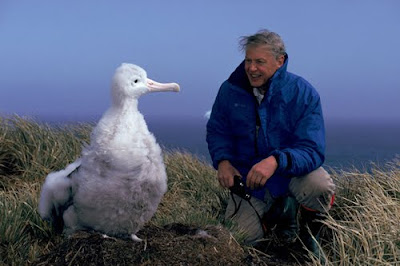 Just when I was getting depressed about the terrible state of today's TV along comes something as magnificent as BBC-TV's new 10-part series about animal behavior.
Titled simply Life, it stars who else but Sir David Attenborough. Parts 1 and 2 are on Discovery and Discovery HD Sunday night at 8 and constitute must-see television.
I've enjoyed chatting up Sir David for decades both on the phone and in person and he's always remarkably enthusiastic about the next project.
At a time when TV networks are cutting back or regressing to sleazy reality shows it's a pleasure to report Life fully lives up to all expectations.
The photography is simply stunning. The whole thing took four years or 3,000 days of filming to film and edit. This time Sir David narrates but does not pop up in every other shot --after all he now is 83 years young.
Life is the title but there's an awful lot of death included. In one early scene in the segment titled Challenges Of Life we look on as tiny penguins make their first underwater foray not knowing killer whales are lurking for a feast.
And we see the whales attack and kill one penguin who gets savagely ripped to death.
In another scene we see dolphins cooperating together to round up a school of fish by muddying the waters and creating such panic the fish seem to fly right into the dolphins' mouths.
We also see three cheetas hunting as one and able to bring down and kill a sturdy ostrich --alone that task would be impossible.
But we also witness stories of survival: capuchin monkeys learning to use tools to smash open thick palm nuts --the young take years to learn how stones can be used as hammers.
And we see a chameleon trapping a preying mantis by shooting out its tongue which can actually hold its prey.
The second hour is just as exciting --a salute to reptiles and amphibians from poisonous sea snakes to maternal African bull frogs building water channels to protect its young.
I remember once telling Sir Davis that Canadian TV had just reached 100 channels and listening to his thunderous laughter. I wonder what he might think now that we have reached something like 959 cable channels?
The result of all this competition is most conventional networks no longer have the viewership or resources to support such a momentous series as Life.
And in the old days Sir David was on TVOntario and PBS whereas these days he has migrated to Discovery ias his Canadian TV "home".
Once we talked about his reticence to ever stage scenes such as was done regularly on that old series Wild Kingdom.
So I'm simply assuming nothing in Life was staged which must have meant hundreds of lost hours for all the photographers simply waiting to get the requisite shots.
The tales here are told from the perspective of the animals concerned which makes for a different dimension. There are indelible images in every hour and the theme is always the same: simply survival.
The third hour on Thurs. Nov. 19 at 8 looks at "Mammals" with another immediately following on "Fish".
Future episodes include "Birds" (Thurs. Nov. 26) to be immediately followed by "Insects" (Nov. 26).
On Thurs. Dec. 3 starting at 8 it's "Hunters and Hunted" followed by "Creatures Of The Deep".
On Thurs. Dec. 10 there are two episodes on "Plants".
In one area Attenborough was criticized --until recently he avoided stories about pollution and ecological disaster but now he appartently sees the error of his ways.
But back to Life: I've never seen such magnificent photography and the commentary by Attenborough is filled with facts and observations. I hope he's not done yet. But what else is there left to document?
LIFE PREMIERES SUN. NOV. 15 AT 8 P.M. on DISCOVERY AND DISCOVERY HD.
MY RATING: *****.
Posted by james bawden at 2:32 AM