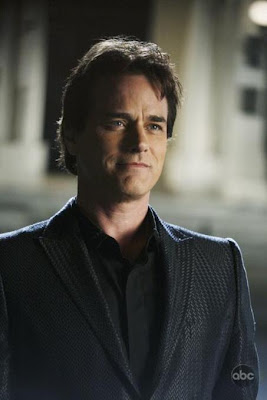 It's strange but I don't recall the 1987 movie The Witches Of Eastwick as being anywhere near one of my favourite Jack Nicholson mocies.
But the flick obviously has resonance. There was a 2002 TV movie starring Marcia Cross, Kelly Rutherford and Lori Loughlin that was an obvious busted pilot.
Does anybody out there remember it?
Heck, does anybody remember TV movies?
ABC's new series Eastwick stars Canadian TV icon Paul Gross and co-stars Rebecca Romijn, Jaime Ray Newman and Lindsay Price.
It is pretty much a clone of Desperate Housewives with a dash of Charmed tossed in. The three lead characters are poorly written and poor Gross sports an ugly hair job that makes him look older than his 49 years.
Question: in the seasons since Due South exited Gross must have had any number of U.S. TV offers. Why he picked this semi dud which doesn't play off his acting charms beats me.
This is a gimmicky, badly executed show. We keep hoping Nicholson and his original stars Cher, Michelle Pfeiffer and Susan Sarandon might pop up and they never do.
CTV's A Channel is running it simulcast with ABC, Wednesdays at 10 p.m.
My rating: **
++++++++++
The Vampire Diaries is as close a copy to Twilight as I could ever imagine. So far most reviews are saying it lacks bite --ha, ha!
But what do I know? It has already garnered a huge audience of female viewers under age 34 so sponsors are flocking to buy time on it.
So shoot me but I have yet to read the books. The show is brilliantly made, however, with lots of well executed effects and since it's from Kevin Williamson (Dawson's Creek) the teens speak like Haervard graduates.
Nina Dobrev plays 17-year-old high school student Elena who is quite a hunkette. Back at school she meets new boy Stefan (Paul Wesley) and yes he's another misunderstood teen vampire.
He's also got an older brother vampire Ian Somerhalder who tries to rejoin the family after a 15-year absence.
Where have I seen Wesley before I asked myself before searchiong on IMDB. Oh, yeah, he was a werewolf on Wolf Lake and a half angel in Fallen
Of course there's a sexy bad girl played to the limit by Candice Accola.
What I did not enjoy about this one was the artsy voice over narratives as both love stricken teens read from their diaries. Oh, I see, that's why they call the thing Vampire Diaries. Now I get it.
Will I watch again? Yes, but only on nights where reruns are on the competing channels.
My rating: ** 1/2.
.
Posted by james bawden at 1:10 AM