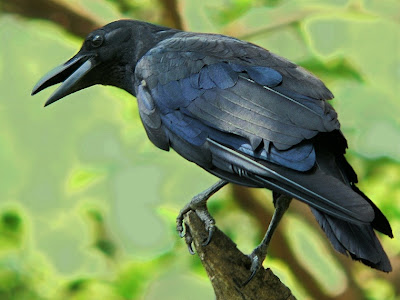 One can quickly forgive filmmaker Susan Fleming for crowing about her new documentary.
Because it's titled A Murder Of Crows and is all about a much maligned bird who turns out to be one of the smartest creatures in the animal kingdom.
"Murder" is the word used to describe a crow gathering but comes with a double meaning as crows get shot at and stomped on all the time in big North American cities.
It's the well chosen premiere attraction on CBC-TV's returning The Nature Of Things Sunday night at 9.
But first a personal observation. I've always liked crows. As a kid on summer vacation at Belmont Lake I'd get up at dawn to bicycle the dusty trails and because I fed the crows one day with a dried out bologna sandwich I was always followed by the black birds.
According to Fleming they had the ability to pick out my face and know I was a supplier of food and not an enemy.
But other people either detest them or fear them. And many get them mixed up with ravens.
"I don't know why people hate them so much," Fleming chuckles on the line from her Uxbridge residence.
"Perhaps its that cawing in the early morning that wakes people up. And there's the history of crows beause they're black and seemiungly malevolent which they're not.
"They really are a lot like humans."Crows live in packs and are monogamous save for a few adulterous ones. Their "kids" can stay with them for up to five years and relatives help tend and feed the youngsters.
"And the more I read about crows the more I needed to make this film."
Her travels took her to Seattle university expert John Marzluff, to the far off Pacific islands of New Caledonia, to downtown Tokyo and to the Australian Alps all in search of the weird and wonderful life of crows.
One thing --don't call them bird brained. Crows have the larghest brain mass of any bird group and seem to behave like primates much of the time. Some scientists have taken to calling them "feathered apes" because only crows, chimps and elephants among animals have the capacity to make and use tools.
So Fleming pitched The Nature If Thing's executive producer Michael Allder who financed her photography excursions here and there.
There included a remote island off New Caledonia "which took forever to get to. There's a New Zealand scientist in very primitive conditions who has found ravens there can make tools to extract insects from trees or get at food not otherwise reachable.
"To shoot that was a challenge. Crows hate changes so we first had to get them used to our photography equipment. And then we had to hope they'd do what was promised."
In this case it involved three intricate moves by a crow to extract a bit of food and required considerable preplanning on the part of the crow.
In Seattle we peer into the secret lives of crows. Tiny radio transmitters planted on fledgling crows bring back signals showing the range of a young crow which can be quite startling.
"One of the subjects sadly was hit by a car. But this wasn't unexpected --only 50 per cent of young crows reach maturity."
In Tokyo Fleming shows how crow nesting on hydro installations can plunge an entire city district into chaos. And crows can also spot one human face in a sea of thousands as is demonstrated in a crowded Seattle park. A guy with a mask on (as in the movie Halloween) had previously rattled them and when he returns the birds emit danger signals.
Fleming had exclusivity on all her shoots. She produces a ton of great visuals to support her theories of how smart crows really are.
"All this is real science, not stunts. It's not a bag of tricks it's an invitation inside the world of crows. And I'm really happy how it all worked out."
But Fleming's persistence is already well known --her TV series The Secret Life Of Gardens used endoscopy photography to take us inside our backyards and see what we had never seen before.
A Murder Of Crows does the same type investigative work on crows. And it's a virtual must see, the first greatish Canadian documentary of the new TV season.
Crows is on The Nature Of Things on CBC Sunday night at 9; repeated on CBC NewsworldThursday Oct. 15 at 10 p.m. Got that?
Posted by james bawden at 11:21 PM