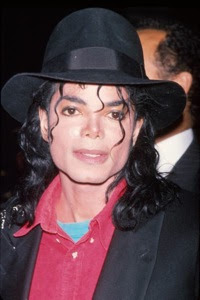 Let's see, the first TV funeral I caught was that of assassinated American president John F. Kennedy.
It was live, it was sombre and the sight of world leaders walking down Pennsylvania Avenue was awesome.
But the moment that broke the world's collective heart was the sight of little John John saluting his father's coffin as it passed.
Next up was the 1965 funeral of Sir Winston Churchill with moments of sheer grandeur.
It was odd to think that the frail, aged leader of World War II had actually outlived the brash, younger Kennedy.
I'm not sure when the coarsening of what should be a sombre time actually began.
Was it the moment Elton John burst into song at Princess Diana's funeral? Perhaps.
And then came the show biz rites for Michael Jackson, hailed as the greatest entertainer of all time but a man in exile and in hiding for most of the time since his 1907 trial for child molestation (he was acquitted).
So from a celebrity trial to a celebrity funeral, Jackson had it all and in just a few short years.
But I couldn't help wondering where all these "friends" had been when he needed them most --and that was at the trial.
How many stepped forth to vouchsafe his integrity back then? Precious few.
And then I thought of a wiseacre's remark when Elvis Presley passed: "Good career move."
Jackson at 50 hadn't had a hit in more than a decade. Late night comedians who once mocked him as "Wacko Jacko" now saluted him as one of a kind.
But the kind of adulation his mysterious death sparked marked the grief shown by millions at the untimely death of Princess Diana.
In both cases few knew what kind of person Diana or Michael really were.
Crowds were whipped into a frenzy by tabloid TV which cynically exploited every teary moment. The moment of Paris crying out for her daddy was replayed a hundred times on the TV news over the next day. It should have been a personal moment but the sheer exploitation of a vulnerable child is shocking.
But will the crowds still be there for Michael and his family six months from now after the sordid revelations of his drug addictions are inevitably "leaked" to the press?
Few people bother to visit Diana's grave these days. In the world of tabloid TV it's on to the next neatly manufactured scandal. In TV news terms a week or so is an eternity --by next week the TV reporters will be onto the next big story.
See that's how tabloid TV works --Michael Jackson is already yesterday's story.
I'm one who thinks Michael Jackson deserved better --when he was alive and needed help that was not forthcoming.
Perhaps now he'll receive the peace that always eluded him in life.
And this just in: Ronald Reagan's state funeral outdrew Michael Jackson's according to the ratings. Does this make Ronald Reagan a bigger star than Michael Jackson? Just asking.
Posted by james bawden at 11:58 PM