Break Out For Space! 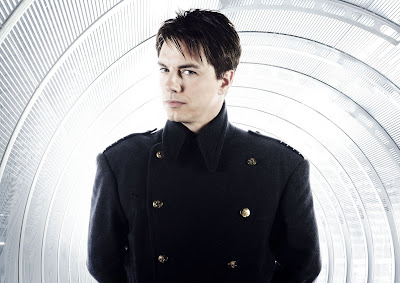 It's being called the "TV breakout of the summer" by TV Guide.
And it's not on CBC or CTV or Global but Space. Are you surprised?
Because summer is the dead season for the old line networks as they largely fade to reruns.
But Torchwood, the innovative and well acted science fiction series from BBC, is in the middle of a five-night run of its season three.
That's what I said: only five new episodes are being produced and they're being run off every night this week on Space (and BBC America and BBC1).
That's quite a feat for Torchwood which had its first season on BBC3 and then hopped and skipped to BBC2 for its second year.
BBC1 took it for the third year with the understanding it would have a short window on the major network to prove itself.
Titled Torchwood: Children Of Earth, it's a well crafted yarn (from Russell Davies of Queer as Folk fame) that contains so many climaxes you won't be able to turn away. It starts with every child on earth standing still in unison and goes on from there.
You're correct if you immediately think of Children Of The Damned but that classic film is only one of the antecedents.
Front and center is the fine character actor Peter Capaldi as an ambiguous government official of the middle level --Capaldi was superior in a 1993 episode of Prime Suspect 3.
We're never sure who the aliens are or what they want. Civilization is threatened but saving it comes at a high price.
Chock full of ambiguity Torchwood is for everyone who can't stand TV science fiction with its cliched stories set inside space ships.
And front and center there's John Barrowman as Captain Jack --I remember watching him rehearse scenes on a New York set for the terrible 1995 series Central Park West (he played a young attorney patterned on John Kennedy Jr.) That prime time CBS soap crashed and burned and producer Darren Star learned valuable lessons and regained his footing with Sex And The City.
Finally, in Torchwood an older Barrowman has gotten the part showing how incisive he can be as an actor (in stage musicals he's been shining all along). He dominates a scene just by entering the room or getting temporarily blown to bits as happened in Episode 2.
TORCHWOOD IS ON SPACE WEEKNIGHTS AT 10.
Posted by james bawden at 12:13 AM