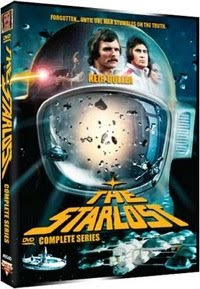 Hello out there! Anybody remember that uniquely Canadian TV series The Starlost?
As the young TV critic for The Hamilton Spectator I was despatched to the wilds of Agincourt's CFTO studios to report on the filming of this science fiction series.
It was 1973 and the stars were American import Keir Dullea plus Gay Rowan and Robin Ward.
Dullea is still around in character parts, Ward flourished as a CFTO weatherman and Rowan immediately left for L.A. and has rarely been seen since.
On that particular wintry day I wasn't sure what I'd find but there they were --not in space duds but in rather primitive attire--Dullea had a bushy mustache and a farmer's hat. The guest star the day I showed up was busty Angel Tompkins wearing not much more than a towel of some sort. Plus a smile on her face.
Starlost seemed to presage Canadian TV's big burst into the big time: meaning syndication in the U.S.
The creator was Harlan Ellison but he soon departed in deep frustration. True, the sets were rather cramped but after all this was a space ship.
No, that didn't bother me as much as the sight of the evil one, played by Walter Koenig sporting go-go boots. Oh, dear!
To save money the 16 hour episodes were shot on tape which has pleasantly deteriorated over decades and now seems muted in its color scheme.
But try to catch the pilot, expertly directed by Emmy winning director Harvey Hart, it sported promise and tension as a group of puzzled passengers headed by Dullea try to save the spaceship named The Ark from careening through space.
With Earth about to be destroyed they're leaving on a huge space ship patterned after Noah's Ark.
Sterling Hayden was the guest star in the first episode followed by such "B" list American stars as Ed Ames, Frank Converse, Simon Oakland.
But you'll also sport such Canadian talent as Barry Morse, John Colicos, Lloyd Bochner and Donnelly Rhodes.
I'm trying to watch all 16 episodes before commenting on the quality. Why not try the same by renting the DVD collection at your neighbor hood video store.
By the way Dullea must have liked working in Canadian TV: he later made another series called Loving Friends And Perfect Couples (1983) which also lasted a single season.
Posted by james bawden at 12:26 AM