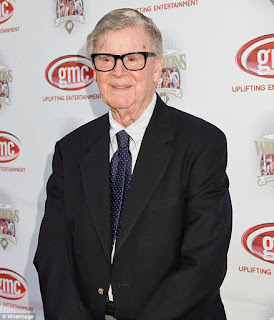 So there I was in Los Angeles in July 1972 and the chief publicist for CBS Mary Lamm was driving me to the set of a new series titled The Waltons.
"Hasn't premiered yet," she told me as her car zoomed through the back lot at Warner Bros.
We stopped at an imposing soundstage and inside the interiors of the Walton family home had been laid out. It was lunch break so there were no actors present.
Then we walked over to an administrative building and into the offices of creator Earl Hamner Jr. Hamner died in March 2016 but I haven;t had time until now to salute this kind and courageous man.
First reaction: he sure was homespun as he related true tales of his life in the Blue Ridge Mountains.
Hamner had recounted childhood memories in the 1963 novel Spencer's Mountain which Warners had made into a 1963 flick with Henry Fonda and Maureen O'Hara "which I positively loathed."
I immediately typed him as a courtly Southern gentleman but this day there were tears in his eyes.
His pet turtle was sick, he confessed. Or was it his secretary's?
We talked about many things that afternoon particularly his thesis that Canadians were lost Southerners --or rather Tories loyal to the British crown who had to emigrated to Canada but never lost their heritage.
Hamner was born in 1923 in Schuyler, Vermont, the oldest of eight children --three girls, five boys and "all tow heads".
"Dad was a machine operator  in Waynesboro who lived away from the family but walked home on weekends the entire six miles and "this was the inspiration for the 1971 special introducing the family to TV viewers."
CBS snapped it up as a potential series to star Richard Thomas.
"It broke my heart when they said our original actors Pat Neal and Andrew Duggan were too old to play the parents in the series. But the network had full casting rights. And the substitutes were Michael Learned and Ralph Waite. Then Edgar Bergen said he wouldn't do a series and he was replaced by Will Geer."
Hamner once said --but not to me --that Richard Thomas made a better John Boy "than I ever could."
But here's the catch: CBS scheduled the new series Thursdays at 8 directly opposite NBC's Flip Wilson then the number one U.S. series.
Hamner showed me the letter from the CBS president which merely stated "Make us proud."
And CBS then forked over $4 million dollars for set contruction and casting.
By the second season Flip Wilson had been destroyed and The Waltons was number two in the national ratings although it always underperformed in the great cities.
Hamner opened and closed every episode with his narration and each episode famously closed with the siblings saying goodnight to each other.
Over the years The Waltons garnered 39 Emmy nominations including 13 wins and in 1873 was names best drama series.
In  1981 The Waltons closed and Hamner's second show went into production for Lorimar: Falcon Crest.
Again I was back in his office as he explained this one: _The Waltons was about a family with no money. Falcon Crest is about a family with too much money."
Hamner wanted to cast Barbara Stranwyck as the imposing matriarch but wound up with Jane Wyman.
Both invited me to a press screening that was a disaster.
The pilot was titled The Vintage Years and had Wyman in a white wig with a crazy daughter up in the tower.
As the lights came on Wyman took over, ordered several cast members fired and virtually produced a new pilot that was a hit.
The series lasted nine seasons but Hamner quit after the fifth season because "it's really not my kind of show." THe reality was it made more money for him as creator than The Waltons.
Hamner was drafted in 1943 and later attended the University of Cincinnati  where he wrote his first script --for the Dr. Christian series, He worked as a staff writer for NBC Radio in New York.
He later wrote eight scripts for CBS's The Twilight Zone and later wrote for such series as Gentle Ben, Nanny And The Professor and Apple's Way another series he created.
His wife Jane was an editor at Harper's Bazaar and they had two children Scott and Carole.
But I'll always remember that first time in his office in 1972 and his fearless prediction The Waltons "just might last a season or two."