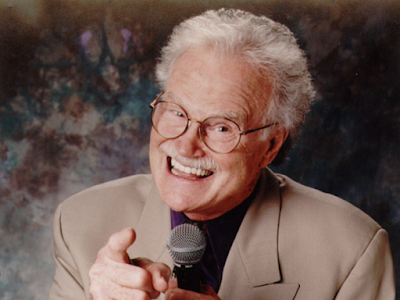 I wasn't entirely surprised to learn of the passing of Canadian comic icon Dacve Broadfoot.
For years he'd been declining luncheon invitations saying he just wasn;'t up to it.
But his passing in November saddened me immensely.
Starting in 1973 he was the steady comedic rock for 15 seasons of CBC's Royal Canadian Air Face.
'I first met him in person in 1975 when RCAF was performing two radio specials taped at Hamilton Place --I was then The Spectator's TV/Radio Critic.
The other cast members --Roger Abbott, Don Ferguson, John Morgan and Luba Goy clearly revered this great figure and in rehearsals he was meticulous in his craftsmanship.
Just a year or two later I met Broadfoot on King Street in Hamilton --dressed as the honorable member for Kicking Horse Pass--he was headed to the Royal Connaught hotel to address a luncheon convention.
One old lady had already accosted him on the street shouting "You're a sorry example of a member of Parliament"--and Broadfoot was grinning from ear to ear.
Other famed characters included Sergeant Renfrew of the RCMP and hockey player Big Bobby Clobber.
Broadent got his start on CBC Radio on such favorites as the Big Revue and Wayne And Shuster.
"Everything I knew about TV comedy I learned from Wayne and Shuster," he once told me.
"They simply assumed a degree of intelligence among the audience and their comedy skits were glacially paced compared with today. They put characterization first."
I remember interviewing him in 1995 for his CBC TV special.
He said at one point in the show "What is our culture? It's gathering up every useless thing you've acquired throughout your life, putting it on tables on your front lawn and making other people pay for it."
I would have though CBC would dig out that TV special and show it as a testament to Broadfoot's comedic genius.
One of the gems from that show had Broadfoot contemplating on the peace and tranquility he always found on Canada Day in Quebec.
He was born in Vancouver in 1925 and served in the Royal Canadian navy during World War II.
He looked startled when I told him as a teenager in the early 1960s I'd saved up my allowance and got into a cabaret performance given by Broadfoot and his equally talented wife comedienne Jean Templeton.
When he joined Air Farce in 1973 "I was considered the old geezer of the bunch. I'd say during rehearsals 'Mo--that won't work. We tried that in 1955 on stage.'"
One of his biggest admirers was British legend John Cleese who had seen Broadfoot in Britain in the 1950s in a revue titled Clap Hands.
'Other revues he starred in during his toronto years: Take A Beaver To Lunch and, of course, Spring Thaw.
"I was on Ed Sullivan as early as 1955," he smiled.' "But I never wanted to ditch my country for American stardom. Never!"
His wonderful autobiography Old Enough To Say What I want was published in 2003. I treasure my copy.
He was named to the order of Canada in 1983 and in 2003 was presented with the Governor General's Performing Arts Award.
One of his biggest thrills he told me was appearing at a gala Royal Benefit in Winnipeg as the honorable member for Kicking Horse Pass and looking up to the box seats to find both Prince Philip and Her Majesty doubled over with laughter.
And I miss him already.