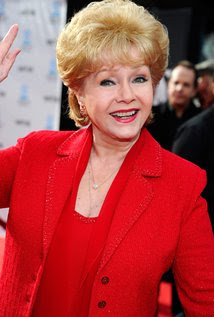 I was lucky to interview the late great Debbie Reynolds twice at length in Toronto when she was in the afterglow of a long career.
The first time was on the set of the CBS TV Movie  Sadie And Son in 1987, a crazy sort of pilot that had Debbie co-starred as a New York city cop with her son (played by Brian McNamara) also on staff.
It was a great stretch to think of our Debbie as a cop because she was petite and far below the normal height requirements.
"Don't worry kid," she laughed in her trailer as she awaited for the shooting call. "This is show biz, we fake everything!"
At the time she was an energetic and bouncy 55-year old and she was still bouncing around at 2 a.m. when director John Llewellyn Moxey was filming deep in the Toronto subway system on the Queen street station which has never been used.
The second time was in 2000 when Deb was then 68 and she suddenly looked older and plumper and she stayed shivering in her trailer waiting to go on the set of a TV movie Virtual Mom.
Here are a few highlights from our chats:
JB: How did you break into the biz?
DR: Well, I'd wanted to be a gym instructor but I didn't have enough money to go to college.  we lived in Burbank where dad was a carpenter worker for the railway. And I somehow got a standard contract at Warner Brothers just a few blocks away which paid me $50 a week. I took lots of lessons --in one class we were even shown the proper way to use a fork and spoon. And I had an extra bit in June Bride (1948) which starred Miss Bette Davis. Eight years later I played her daughter in the movie The Catered Affair and she pretended to remember me. In The Daughter Of Rosie O'Grady I was June Haver's kid sister and then my option was dropped like that.
JB: Then what?
DR: I got another starlet contract at MGM and in my first movie there I sang the Abba Dabba song in Three Little Words(1950) with Carleton Carpenter as my partner.
JB: Your fourth movie at MGM was Singin' In The Rain (1952)?
DR: I was forced on Gene Kelly. He wanted to hire outside the studio but my mentor Louis B. Mayer said no. And for three months we rehearsed those numbers until my feet started to bleed. I was at my wit's end and crying in an alley way when Fred Astaire came by and stopped. He'd been the star of Three Little Words. And he arranged to secretly train me in the next sounstage. We went through all of the moves hundreds of times. When I came to film the scene where we must jump over the sofa Gene was so pleased he put his tongue in my mouth!
JB: That made you?
DR: I did stupid little things like I Love Melvin, The Affairs Of Dobie Gillis, Give A Girl A Break. At RKO I was in my first big comedy opposite Dick Powell who was 50 and I was the girl pursuing him and I was 22.That was Susan Slept Here.
JB: But you survived whereas Jane Powell did not.
DR: We made two films in a row --Athena and Hit The Deck--and then her contract lapsed. Musicals were no longer the rage so I did The Tender Trap opposite Frank Sinatra and I had a whole new career as a comedienne including Tammy And The Bachelor and The Mating Game.
JB: Then came some very big years.
'DFR: When my husband Eddie Fisher left me! It gave my career a weird boost. And I made It Started With A Kiss, The Gazebo and my favorite comedy The Pleasure Of His Company with Mr. Astaire and Lilli Palmer as my parents.
JB: You did go back to MGM for The Unsinkable Molly Brown in 1964.
DFR: That was me. I'm unsinkable. I got the character right away.
JB: Why did your TV series The Debbie Reynolds Show )1964) bomb.
DR: Because they wanted me to be Lucy instead of just Debbie. So It was an imitation kind of show. And The next one Aloha Paradise (1981) that was just a big stinker.
JB: You just stopped making movies around that time?
DR: Because I didn't fit in at all. It was Mr. Mayer who told me "Never show your ass." Best advice I ever got. What he meant was leave something to the imagination of the audience. Today everything is so sordid. I stay at home and watch old movies.
JB: You're also a collector.
DR: I go top all the auctions of movie props. I have a warehouse filled with stuff and someday I'll open my own museum.
JB: Future plans:
I go on the road 20 weeks a year. They loved me in Australia. I do Vegas, many dates with the local symphonies. I'm a brand. Goodness had everything to do with my success.
Then the bells rang and Reynolds ran out dressed as a very tiny New York city cop and just to wake up the sleepy crew she launched into a refrain of "Singin In The Rain."
.