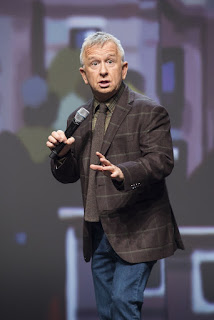 Here I go again --every Christmas season I get to interview Ron James who has a quirky end-of-year TV special that's been a staple of CBC New Year's Eve.
This year I had to telephone James in Halifax where he was tending to the needs of an ailing father.
And as usual the subject started with the simple question : why is James considered such a delightful comic.
"It's the way I see things, I'm guessing," he says with a nervous laugh. "There's a lot of lightness in my comedy but also some very dark stuff. It's where I come from."
Born in Glace Bay, James is rightly proud of his heritage and he says his "Canadianess" plays well wherever he finds himself across this sprawling country.
"I'm about the same I always was," he jokes. "But certainly there's a lot more political issues discussed these days. These politicians are sure targets."
I haven't see the whole hour but James artfully dices and slices  in his usual hilarious monologue..
Donald Trump is a great target and James has one nugget of advice: "Get rid of the tweets."
Says James to the captivated audience: "How else can you figure he wound up in the White House?"
Explaining the Canadian election James says of course the winner would be Justin Trudeau as opposed to Thomas Mulcair :"Looking badly in need of a rabies shot."
Other targets of James's comedic wrath: Samsung 7, Pokemon, Stephen Harper, North Korea.
These days James tells me he plays some 40 dates across Canada every year.
"The smaller town audiences are so enjoyable. They're delighted just to be included, they know what it really means to be a Canadian."
One place James won't want to revisit: comedy clubs. "I honed my talents there but no more. I like bigger audiences and there are some great theaters across Canada. We did this one in Kingston. I like to go some place different every year."
James first came to attention as a member of Toronto's Second City troupe. He learned how to texture routines for the audience and how to play off them. And he finally got the courager to try Hollywood.
There were guest spots on such TV hits as Wings as well as busted pilots before he realized Canada was his home.
For five seasons James reigned supreme on his own CBC TV comedy show which artfully mixed stand up with sketches.
"The sketches got better. I tried at first to do them as part of the running show. When we filmed them separately they became more fluid and funnier, that's all."
His great 1994 docu-comedy Down And Out In Shaky Town is still a delight when viewed on YouTube.
"At the end I discovered Canada is where it's at for me."
Anyone doubting James' acting skills should search out his outstanding dramatic turn in the series Made In Canada which is now out in a boxed set.
And there's also his first TV sitcom the wild and wonderful Blackfly (2001) which initially ran on Global TV.
When I tell James a video store manager said it was one of the most requested items not yet on DVD he's momentarily stunned.
But I have a new role for James and I'd like CBC to seriously consider this.
Apparently CBC is going to get a cash infusion from the admiring Liberal federal government.
Some of that dough should be used to mount a late night talk show.
CBC once had a late nighter starring Peter Gzowski and later Comedy had one with Mike Bullard.
James has the smarts to front such a Canadian TV effort --in university he was a history major--and if you watch this new special you'll see he's a comedic mesmerist who can captivate a very demanding audience for the better part of an hour with his standup genius.
So how about it CBC?
RON JAMES TRUE NORTH SPECIAL PREMIERES ON CBC-TV FRIDAY DECEMBER 30 AT 9 P.M,REPEATED JANUARY 1 AT 9 P.M.