I'm not recommending Richard Stursberg's new book The Tower Of Babble about his time as CBC's top programmer merely because he mentions me.
But I admit I looked up my name in the Index, saw it, and only then bought the book.
I think anybody who wants to understand the very peculiar state of Canadian broadcasting can find a lot of information here.
Simply stated Stursberg was parachuted in by CBC President Robert Rabinovich in  October 2004 in a somewhat desperate attempt to turn around the battered public broadcaster.
I first met him at the CBC's fall launch of that year where I interviewed him and found him a very well informed chap indeed with a high reputation from his years heading Telefilm Canada.
And at first Stursberg seemed to take a measured approach --Slawko Klymkiw briefly stayed on as chief TV programmer even though he'd been expecting the job Stursberg got.
But things go tricky when Stursberg peremptorily shut out CBC's unions in August 2005 because he rightly expected they were about to strike and disrupt the new fall CBC TV season.
In a later confrontation with The Star's Directorial Board which I attended Stursberg was unapologetic in his thesis he had saved the season even though ratings initially plummeted.
And the more he probed and pried he came across a culture at the CBC that was defiantly anti-ratings.
The reason Stursberg was so adamant at getting better numbers for CBC shows on both radio and TV was apparent --dwindling federal government subsidies meant CBC was more dependent than ever on advertising revenues.
But without stronger TV audiences those revenues were slowly crumbling.
On TV Stursberg steered a number of fine drama series like Intelligence, The Border and Being Erica. I liked them all but only Being Erica lasted more than two seasons. However the blandest one, Heartland, became a real winner with the younger set.
I still think dumping RCAF was a big mistake. It was a CBC franchise like NBC's SNL and look how NBC has nurtured SNL over the decades with infusions of fresh talent.
Little Mosque On The Prairie was a monster hit but two co-productions with Moses Znaimer (Rumours and Sophie) were unalloyed duds.
And Stursberg caused much gnashing of teeth by shutting down entirely Opening Night, the weekly two-hour high arts series that usually got low ratings.
I thought this was unnecessary --all he had to do was move the show to Sunday afternoons six or seven times a season, use mainly reruns from the CBC archives, toss in Veronica Tennant as host and keep the artistic community on CBC's side.
CBC did exactly that in 1979 during similar cost cutting sprees and the show named Rear View Mirror kept the Corp going for several years.
Importing such U.S. shows as Wheel Of Fortune and Jeopardy was actually a ratings windfall but went against former president Pierre Juneau's promise to cut out imported American schlock.
In the CBC news room Stursberg was similarly maladroit. There were bruising confrontations with news head Tony Burman who eventually left (as did Klimkiw). Stursberg says he merely wanted a desk and chair in the newsroom to observe proceedings. Really, that's all?
Bringing in Magid Associates from the U.S. to brighten up CBC news was silly--these days an uncomfortable Peter Mansbridge seems to be winding his way through a dated wine bar and the emphasis on hard news has been softened.
But Stursberg's wish to move the National on CBC to 11 remains an excellent idea --it would blast CTV out of its ratings complacency and allow CBC to broadcast adult dramas at 10. Plus The National would still run on CBC's News channel at 10.
His ruminations about getting rid of CBC's antiquated transmitter systems makes a whole lot of sense as does his wonderment that big cities like London and Hamilton have absolutely no CBC TV or radio coverage while New Brunswick with far less population sports three CBC affiliates.
Look, the book is very readable especially when he's dealing with his legion of enemies including Peter Herrndorf or CTV's Ivan Fecan who grabbed away the Vancouver Winter Olympics --but paid such a price CTV finances were in ruin. 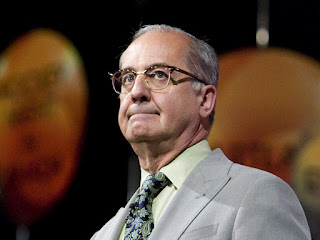 I disagreed with a lot of the Stursbergian philosophy but he began a debate about the future of public broadcasting that just will not go away.
And besides he quotes me which I like.
Posted by james bawden at 11:54 PM