Living In The Shadow Is Must-See TV

I'm just not sure how much attention the fine new documentary Living In The Shadow will get before its premiere on OMNI 1 Sunday night at 9.
For me it's must-see TV, a stark, uncompromising look at the horrors of Chornobyl that contains images both frightening and awesome.
Directed and produced by James Motluk it offers horrifying scenes of the nuclear devastation that ravaged the Ukrainian landscape after the explosion on April 26 1986.
The videos were taken by Toronto-based photographer Lu Taskey about four years after the disaster and are startling. We see whole apartment blocks which are completely abandoned ---it's like a scene from the fictional movie On The Beach only these scenes are completely true.
Evergreens are stunted.  Entire villages are eerily silent. Troops wear white masks in a wholly inadquate clean up campaign.
Whole areas --villages, farms, schools were ordered shuttered by the Soviet government in a cover up campaign of monstrous proportions.
That the videos were shot at all is a testament to Taskey's courage --the authorities would surely have detained him and confiscated the film if they had known about it.
Director Motluk  was shown the boxes of videos some 20 years later and instantly realize what a treasure trove of history he had in his possession.
Some 150,000 Ukrainians had been forced to relocate from the surrounding area leaving much of what they owned. What ensured was a cover up of monstrous proportions.
But the human cost was never properly understood.At one hospital that's visited we see the beautiful children who are the true victims --leukemia cases were rampant and young patients were treated with old bandages because of supply problems. Orphanages were overcrowded and the consequences decades later are enormous.
Survivors such as Nadoa Zastavna tell their stories of survival. And there are lessons to be learned about the consequences of dealing with nuclear power.
The Soviet system covered over the inadequacies of government inspectors in so many fields.
New footage shot near the site shows hard hatted  inspectors still on duty there.  But what can they do other than keep people away?  The land will be polluted for generations to come. --the water table is still toxic, children are still dying from the after effects.
But the story is also one of hope--Taskey and his close friend Jerry Shudrak are shown reminiscing about the powerful organization they set up Children Of Chornobyl Canada Fund and the way aid was marshaled among the Canadian Ukrainian community.
And the theme at the film's end is simply stated: we are all connected and unless we learn from the mistakes of Chornobyl then they could be repeated  in other nuclear facilities closer to home.
Motluk made the compelling documentary for his boutique company Guerrilla Films. 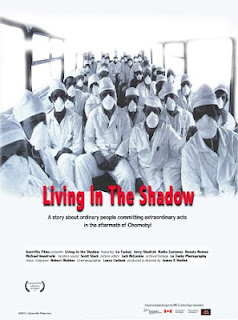