New Mini-Series --And It's Canadian! 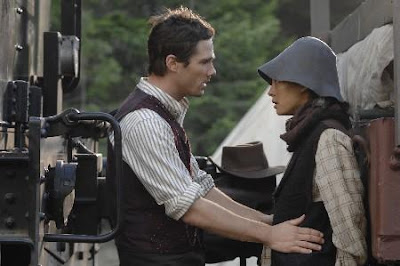 It's only a coincidence but I've been thinking a lot lately about the date of TV mini-series.
There used to be a lot of them during sweeps months: Kane And Abel, Centennial, The Winds Of War, Lace.
And then the whole TV form of "minis" virtually disappeared.
TV network executives both in Canada and the U.S. blamed declining audiences plus the sheer cost of the fenre.
In the U.S. the collapse has been almost complete. But in Canada there have been a few shoots of promise.
The latest example is the four-hour two-part mini The Iron Road which premieres on CBC Sunday night at 8 with the conclusion the next Sunday also at 8 p.m.
This one was a long time in the making. CBC announced it as far back as 2006 and production was completed the next year.
The stars are an internationally eclectic bunch: Sam Neill, Peter O'Toole, Luke MacFarlane, Ian Tracey. The Canadian director is David Wu (Snow Queen), the writer Raymond Storey (Butterbox Babies).
The story completely true as it is would rather be forgotten by many Canadians: it's how Chinese immigrants (and Irish ones too) were brutally mistreated in the transcontinental construction starting in 1885 of the Canadian Pacific Railroad.
CBC already made an epic on the subject based on Pierre Berton's The lLst Spike way back in 1978 and a little of the story was covered there.
But The Iron Road is the first Chinese-Canadian coproduction in 20 years. The first and last was the TV version of Bethune with Donald Sutherland and Helen Mirren.
Both Bethune and The Iron Road were made in two versions --an elongated version for TV in mini form and the other as an art house movie.
And that dual purpose prevents The Iron Road from entirely satisfying. It seems to lurch between plots and then contain a fair amount of padding. Perhaps this is the reason CBC is finally running it off in the summer doldrums..
I found the story pretty enthralling and well shot and acted. the presence of O'Toole and MacNeill guarantees some international sales.
And you really owe it to yourself to sit back and learn history from a sprawling mini-series that helps explain a dark chapter of Canada's past.
Posted by james bawden at 12:17 AM