Mad Men Back For Third Season 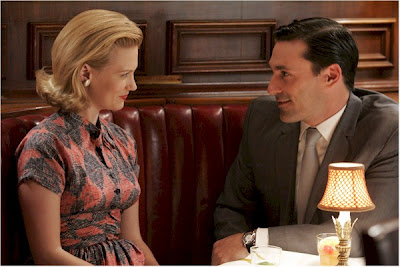 Mad Men has started quite nicely for season three. But it was only available (Sunday night at 10) if you can get the American channel AMC.
All Canadian networks passed on the best show on network TV these days.
Here's why: Canadian networks are losing big bucks these days and it's all because of a heavy reliance on imported U.S. series.
CTV bought and ran the first two seasons of Mad Men, simulcasting the series with AMC: Sunday nights at 10.
But Mad Men plays out of the regular TV season. It begins in August when the competition is mostly reruns. So advertising dollars for it have always been scarce.
So CTV passed and so did all of its Canadian competitors. They far prefer to pay big bucks for silly American realism shows and half baked dramas.
In truth Canadian networks are not interested in content. They'll buy whatever is running big on the American networks so they can simulcast these same series and reap the big ratings.
Mad Men returned where it had left off last season. The time frame was after the Cuban Missile Crisis but before the assassination of President Kennedy in 1963.
The opening hour was written by creator Matthew Weiner and fairly crackled with tension. Don Draper (Jon Hamm) was up to his usual tricks of trying to be a good father while bedding a willing stewardess during a business trip to Baltimore.
In fact the hour began with Don's weird memories of how he was born to a prosttute and given away to another woman --was he told this or was it all a product of his vivid imagination?
Don's wife (January Jones) is pregnant yet again whiule emploees at the agency are being harassed by their new British owners. The chief of accounts gets dumped and two competing heads are assigned presumably to fight over the top job. Also during that Baltimore trip one of Don's colleagues is caught with a --male hotel clerk.
The characters are so well written that this series is better than most new movies out there these days.
But don't tell the Canadian networks who are busily promoting the season debuts next month of American hackneyed reality series and shop worn procedural dramas.
AND THIS JUST IN: Back from my weekly one on one session at Apple's Eaton Center store where I'm told iTunes will be carrying Season 3 of Mad Men starting today. The total season cost for a pass for Mad Men is $39.99 which is the only other way to watch it if you don't get AMC which is a discretionary service.
I'm still waiting for some Canadian network to pick it up or maybe even show it later in the season. Hello out there? CBC, Rogers, Global, E!, hello?
WAIT A MINUTE!: Readers of this column have phoned with an alternate way of accessing the third season of Mad Men. Surprise it's Rogers In Demand.
Turns out if you are a Rogers Cable TV subscriber you can click To Channel 100 and there it is: Mad Men, Season Three and the first episode came up Monday.
So for the next 12 weeks by accessing Rogers a day after AMC's Sunday broadcast of Mad Men you can watch the rerun on Rogers even if you don't subscribe to Mad Men.
Check it out!
Posted by james bawden at 11:30 PM