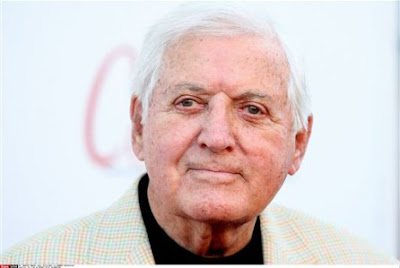 So there I was in the Beverly Hills living room of one of Canada's Biggest Ever TV stars.
Lorne Greene?
Nope!
Gisele Mackenzie?
Hardly!
Morley Safer?
I said TV star of stars!
It was Monty Hall
Let's Make A Deal ran continuously on ABC from 1963 through 1977. and then was syndicated for the next 15 years.
Contestants were picked at random from the audience and dressed in wild costumes and had to chose between Doors 1, 2 and 3.
"It was a big hot the first week," Monty told me. "And audiences grew and grew. We did a nigh time version. We even made it into a home game like Monopoly."
Monty was born in Winnipeg in 1921 of Orthodox Jewish parents --dad Maurice ran a slaughterhouse.
"I attended Lord Selkirk School and then St. John;'s High School and took a Bachelor of Science degree in chemistry from the University of Manitoba.
"I had great marks but didn't get into Medicine because there was a quota against Jewish students.:"
After a brief stint with the Canadian Wheat Board he moved to Toronto (in 1948) and got a job as an announcer at CHUM.
"They had me change my name because Toronto was a WASP paradise ."
"I did a radio series Who Am I and then in 1955 moved to New York city because there were few opportunities for guys like me.]"I could have done Let's Make A Deal for CBC --I was turned down by horrified executives --CBC run a quiz show that was actually popular?"
I did local TV where I introduced cartoons for kids and then I guested on Strike It Rich and Twenty-One on NBC.
In 1959 I was hired to co-host live broadcasts of the New York Rangers in Manhattan --I got the job because I was Canadian.
In 1963 he started Let's Make A Deal; in Los Angeles. "The rest is history. We ran until 1968 on NBC then ABC picked us up. It aired in syndication for a decade starting in 1971.
"I also hosted Split Second, Chain Letter, Masquerade Party, Three For The Money, Anybody's Guess --all with my production partner Stefan Hatos."
There's a philosophical problem named after him --The Monty Hall Problem, a thought experiment involving three doors, two goats and, yes, the inevitable prize.
I'd meet up with Hall every year in Toronto for decades as he journeyed to help out during the annual telethons for Variety Village.
"I'll always be a proud Canadian" he told me.
Sure, he lived on a street of multimillionaire movie stars but my heart has always been in Winnipeg. In my mind's eye I'll always be Monte Halparin."
He married childhood sweetheart Barbara in 1947 and they had three "adorables" -his words: actress Joanna Gleason, TV executive Sharon Hall and TV producer Richard Hall.
It was Sharon who tried unsuccessfully to remake the brand as a new quiz show but Monty told me "That was then and this is now."
I once asked Hall how much he'd raised for charity. I'd heard the figure was a cool billion dollars.
So I asked Hall and he nodded.
"It's in that vicinity but keep it quiet. I want to raise another billion before I die."
Monty Hall died of heart disease, aged 96.
And I already miss the guy.