A Better Man: The TV Documentary At Its Finest 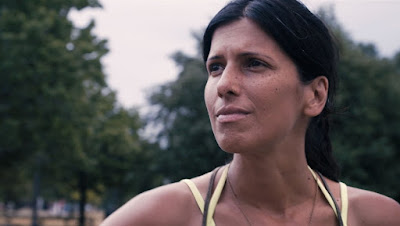 It's entirely appropriate that at one screening of the new documentary A Better Man there were therapists stationed in the lobby available for counseling.
The vivid film directed by Attiya Khan and Lawrence Jackman depicts a violent relationship between two teenagers --Attiya and Steve (last name withheld) that led to years of brutality.
The TV premiere is on TVOntario Saturday November 25 at 9 p.m.
Arriya sent me a message about the making of her film. An advocate and counselor for women she writes "I had been continuing running into my abusive ex-partner Steve for years. Over these years I had begun to feel more safe during our encounters, and during one of our run-ins he began to apologize profusely--although he never said what he was sorry for. But I knew instinctively that there might be more to his conversation."'
It was Attiya's idea to talk with her on camera and after some months of hesitation Steve agreed and the first of their conversations was recorded.
It was surprising to me that "Steve" agreed to participate in this double profile but he certainly has courage.
It cannot have been easy for either of them.
When they revisit the apartment building where they once lived Attiya suddenly has the urge to throw up, the emotions of the moment are simply too much for her. She is certainly surprised Steve has come to reminisce about a romantic relationship that began and faltered when both were high school teens.
At another point she tells the accompanying therapist who is sometimes included that the strangling from Steve almost caused her to lose consciousness.
Steve who is mostly silent and contemplative cannot sometimes remember whole incidents as if he has desperately tried to expung them from his memory bank.
Only slowly do ugly incidents seem to bring back his memory --at other times details remain very fuzzy.
The scenes of the former couple revisiting the scxhool halls and spotting their old lawyers show that teachers knew something was wrong --one told Attiya she always spotted bruises on her arms .
Steve is silent much of the time, overwhelmed by the mass of details, but he is never quite sure why his violence erupted against the girlfriend he clearly loved.
In her e-mail Attiya tells me people who have seen it reflect on instances of violence in their communities.
We see Attiya in her new relationship that includes a loving husband and delightful toddler.
But some of Steve's short bursts of sentences clearly surprise her with the revelations.
I think the film was made in Montreal but that's never made clear.
We see other friends from that time drift in and out --some were aware of the situation while others clearly are caught off guard.
Viewers expecting cathartic moments and a clear resolution mayl be disappointed. This is life not melodrama.
As Attiya writes :"It had been 20 years and while I felt much stronger and I had a wonderful family and a job I enjoyed and incredibly supportive friendships, I was not healing.
"Sharing my memories with Steve and watching him acknowledge the truth about his violence, I felt myself healing in real time."
I admired the film for that very aspect --this is  how real life functions.
It seems to me Attiya and Steve are still scarred but for different reasons.
The fact Styeve was willing to re-connecr makes the film worthwhile viewing.
In a TV movie there might be a resolution but that would be melodramatic.
A better Man shows us Attiya and Steve are still trying to explain and understand that great void 20 years later.
A BETTER MAN PREMIERES ON TVONTARIO SATURDAY NOVEMBER 25 AT 9 P.M.
MY RATING: ***1/2