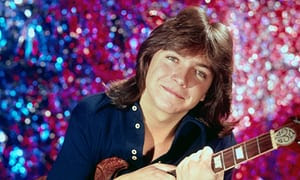 As a summer student at The Globe And Mail my assignment was to seek out the newest teen sensation David Cassidy for a "tell all".
It must have been the summer of 1971 when "Cassidymania" was at its height.
I found the fretting teen sensation holed up in his Royal York hotel room preparing to go on that night at the CNE Stadium before 35,000 rapturous fans.
Cassidy was just as perplexed as the next teen sensation about hids rapid move from obscurity to teen mania.
He was the star of a bubble gum TV series The Partridge Family where his real stepmom Shirley Jones was playing his TV mom.
He was very handsome and unthreatening and aged 20 --the perfect age for teen girls to swoon over him from a safe distance.
But when he returned to the CNE the next summer attendance was down by half.
And he did not return for a third year --the fate of most bubblegum sensations.
I even interviewed him on the set of his TV series in 1972 when ratings were dipping.
His fans were growing into womanhood and a bit astonished they'd ever given their hearts to such a nice, assuming guy.
And a few years after that his brother Shaun took over the mantle for a few years before becoming a TV producer.
David Cassidy still worked --he was a Vegas staple and I interviewed him again on the se-t of David Cassidy ---Man Undercover--which ran on NBC for a mere 10 episodes in 1978.
Cassidy demanded his name be in the title and NBC obliged him thinking he was still a popular TV staple.
By contrast The Partridge Family ran for 96 episodes and four seasons.
The fate of the other kids on that show was also unkind.
Susan Dey who played David's TV sister Laurie Partridge had a second career as an adult in Law And Order and Love And War but has not acted by choice since 2004.
Danny Bonaduce has been hosting a morning talk radio show in Seattle since  2011.
At one point Cassidy claimed the merchandising from Partridge Family had netted $500 million but he only got $5,000.
I remember asking him decades later if reports of a TV reunion series were serious and he nodded yes.
But he insisted creator Bernie Slade be brought back to write it and it never appeared.
In 1994 he wrote a book about  being Keith Partridge but it never sold.
But he returned to Vegas multiple times for successful gigs.
He was always soft spoken and sincere and I was sad to learn of convictions for drunken driving in later years.
He also battled the same form of dementia that took his mother.
I'm also thinking of other teen idols and whatever happened to them.Like Bobby Sherman who was a wow on Here Come The Brides --he retired from singing to become a paramedic and police officer.
And just the other night I caught a rerun of a 2013 CSI episode starring Cassidy as a drug lord and his acting was impeccable. although he was much aged.
Perhaps a future as a character actor might have been next.