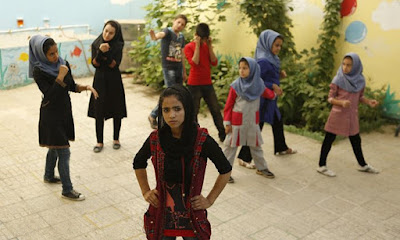 I almost gave up on the brilliant new documentary Sonita --the first 15 minutes are hard going as we are introduced to an introverted Afghan refugee struggling to survive in Iran.
But I stuck with it and so should you --this profile touches most of the emotional bases and emerges as a must see profile of a young girl determined to survive in a male dominated culture.
You can catch it on TVOntario Wednesday May 18 at 9 p.m. --it's a North American premiere.
What an incredible character Sonita turns out to be.
If she had her way Michael Jackson  would be her father and she'd be a rapper commenting on the violence in her society and the way women are disrespected.
We first see Sonita performing for her mates in a Tehran shelter --they are refugees from the civil war in Afghanistan.
The pert teen was originally into rock music but has turned to rap because it allows her to comment on the ways society has turned against her generation.
And we get to know her and love her for her courage.
Director Rokhsareh Ghaem Maghami bonds with her 18-year old subject and builds up a portrait of  survival and identity in a region of the world perpetually at war.
This film took three years of shooting as we see the plight of Afghan  refugee in Iranian society.
In fact the 40-year old Maghami became completely involved in the life and goals of this courageous teen to the point she put up $2,000 to ensure Sonita's future.
You see under Afghan law Sonita is expected to return home and marry someone she does not even know so her dowry of $9,000 can go to her brother so he can purchase a wife of his own.
At the beginning it is taken for granted that Sonita's story will not have a happy ending --everything is so stacked against her.
A refugee, she lacks a passport and it seems a music scholarship in the U.S. will be out of her reach.
The director has said that she only interviewed Sonita as a favor to a cousin who worked at a hostel for child laborers.
At first Sonita was sullen and uncommunicative but there was something about her inner strength that was oddly appealing.
Sonita wanted to be a rapper although Iranian society bans female singers.
Sonita is but one of three million Afghan refugees struggling to survive in an often hostile environment.
Only 18 per cent of Afghan women are literate compared to 45 per cent of men, The girls marry as soon as possible as protection.
Sonita's journey becomes our journey. We see her blossom under tutelage and her songs are courageous laments about the problems of her people.
From timidity she evolves to bold rapper and the "happy ending" is wondrous to behold.
So Sonita becomes must see TV.
SONITA PREMIERES ON TVONTARIO WEDNESDAY MAY 17 AT 9 P.M.
MY RATING: ****.