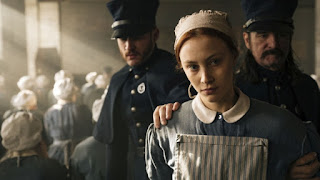 Fighting Back!
That's the response of the beleaguered CBC as it struggles to hold its audience while still trying to fiull all roles as the country's public broadcaster.
At a star studded affair at CBC's downtown Toronto studios the mood seemed positively upbeat after years of budget cuts and constraints.There's even going to be a new summer drama series 21 Thunder set in Montreal and starring Christy Cook (Sephanie Bennett from The Romeo Section).
I thoroughly enjoyed chatting her up and Michael Levine (Republic Of Doyle).
It's been a bit since CBC had a hit Montreal series and this could be the one.
And coming on the heels of The Handmaiden's Tale there's going to be a new miniseries titled Alias Grace written and produced by Sarah Polley starring Sarah Gadon as a young, poor Irish immigrant and co-starring Paul Gross, Anna Paquin and Kerr Logan.
I also got to cat up Allan Hawco whose new drama series Caught is set in 1978.
Hawco told me it was a mighty difficult decision to close down the phenomenally popular The Republic Of Doyle but "I'm an actor. I had to move on as hard as that was for me."
Co-starring are Paul Gross, Tori Anderson, Eric Johnson, Charlotte Sullivan.
The Frankie Drake Mysteries comes from executive producer Christina Jennings --she is currently responsible for the long running Murdoch Mysteries.
This time out we'll follow the adventures of two female detectives in the Toronto of the 1920s. Starring are Lauren Lee Smith and Chantal Riley.
I suggested importing the cast of Murdoch in a mystery that starts in Toronto in 1900 and gets solved 20 years later.Hey, I really like that idea.
A new CBC drama series premiering in winter 2018 stars Canadian TV star Kristin Kreuk(Smallville) as an attorney returning to her small town roots.
I had a long conversation with Ilana Frank whose fine series records includes The 11th Hour, Rookie Blue and Saving Hope.
Returning CBC hour series hits include the venerable Heartland, Murdoch Mysteries and When Calls The Heart,
I finally met the great comedy talents responsible for Baroness Von Sketch Show which returns Tuesday June 27 at 9 p.m. for seven new half hours.
I think it deserves a fall prime time slot next.
And I re-met the creative team behind Kim's Convenience which returns for 13 new half hours in the fall. I think it's almost as funny as Schitt's Creek.
One new inexpensive series and all most  certain success will be The Great Canadian Baking Show which gets paired Wednesday nights with the original The Great British Baking Show.
Also returning Mr. D, Rick Mercer Report, This Hour Has 22 Minutes, Workin' Moms.
CBC is also investing in 15 original digital series.
There was a lot of talk at the opening meeting of using different platforms and how to fight back.
And there was one nostalgic note as Peter Mansbridge made his last appearance to TV critics --he's been anchoring The National for decades and retires from front line duty this summer.
And I'm still hearing one replacement could well be Ian Hanomansing.
There seemed to be more CBC employees in attendance this year--I'm told the Liberal government is promising more money for programming which is the best news of all.
What is immediately needed are av few miniseries on Canadian history like such pas successes as Pierre Berton's The Last Spike amnd the one with Riel.
CBC needs to win back the artsy crowd who have drifted over to PBS.
I remember in 1979 when CBC was in a similar financial bind the archives were opened and a "new" series Rearview Mirror created to run several Sundays with host Veronica Tennant.
Reruns of great opera and ballet specials were run plus choice episodes of such hits as Front Page Challenge and even an old Telescope interview with Charles Templeton quizzing Somerset Maugham.
In fact I think CBC should revive Front Page Challene and stock it with current Canadian stars and add Peter Mansbridge as host and for relatively little money have yet another hit.
How about it?