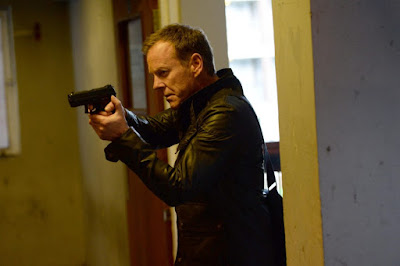 I always enjoy myself at the "CTV Upfronts" held annually at the Sony Center.
Booze and dailies are served with abandon to thousands of potential advertising buyers and CTV also imports bunches of top American TV stars.
But the difference at CTV is a firm commitment to Canadian programming something I find lacking at Globasl and Rogers..
It's supposed to be 50 per cent Canadian content in prime time but no network seems eager to hit that mark.
Instead CTV has plowed its doug into such admirable locally made hour dramas as Flashpoint, Motive, The Listener and the still running Saving Hope which returns mid-season to the schedule.
CTV says it is committed to a new six-part hour drama The Cardinal based on the John Cardinal mysteries by Giles Blunt to star Billy Campbell (The Killing) and Canadian actress Karine Vanasse.
Discovery Channel, a Bell Media subsidiary, will produce its first scripted series Frontier starring Alan Hawco (Republic Of Doyle) and Jason Moma (Game Of Thrones) set in the era of rivalry between the Hudson's Bay Company and New France.
Netflix will pick it up in the U.S. --a first for a CTV series.
CTV is also making in association with CraveTV Russian Peters Is The Indian Dective cast as a Toronto cop who finds himself called on when vacationing in Mumbai.
CTV is saying it needs to attract more female viewers so the network is slowly but surely veering away from comic superheroes and into more touchy feely shows.
So the new series Conviction will star Hayley Atwell as a troubled lawyer and daughter of a U.S. president working on wrongful conviction cases. Co-starring are Eddie Cahill and Canadian actor Shawn Ashmore.
Then there's the new show Notorious starring Piper Perabo as a top female producer.
Also, Toronto's Kiefer Sutherland returns to series TV as an American cabinet minister in Designated Survivor --the cabinet gets blown up and he becomes U.S. president.
Also new: Conviction starring Hayley Atwell and Eddie Cahill, Many Moore and Milo Ventimiglia in This Is Us, a TV spinoff of The Exorcist to headline Geena Davis, and Katy Nixon in American housewife, Kevin Williamson's  time traveling drama Yo,e After Time
Bravo is getting a face lift with such new series as Shooter from the Mark Wahlberg movie to star Ryan Philippe and Omar Epps,'hen there;'s the female centric series Famous In Love starring Belkla Thorne plus Queen Sugar produced by Oprah Winfrey.
CTV continues its stranglehold as Canada's most watched network.
It has the number one newscast starring Lisa LaFlamme and its W5 current affairs show has been on forever.
I also had the chance to catch up with old pal Lloyd Robertson now fronting CTV's W5. I reminded him I was in the audience that day he defected from CBC to CTV right in the middle of the CTV Upfronts.
""Ultimately both networks benefitted," Robertson said. "CBC was able to break the stranglehold of the unions who forbid the CBC anchor from touching the script and with Harvey Kirck CTV finally became a big time news competitor."
But I submit CTV network has stumbled badly by canceling its morning staple Canada AM after 43 years.
Would CBS ever dare cancel 60 MInutes or NBC ditch Today?
Of course not.
These are brands and CTV desperately needs such staplers as Canada AM.
A new morning show will emerge this fall from its downtown studios to star the innocuous Ben Mulroney.
When a grinning Mulroney took the stage another TV critic whispered to me "He's beginning to look and act exactly like Jay Leno."
And I'm also hoping sooner than later CTV will jump start a Canadian late night talk show --it has a bunch of U.S. night time talk imports but there's been nothing Canadian since Mike Bullard's hey days.