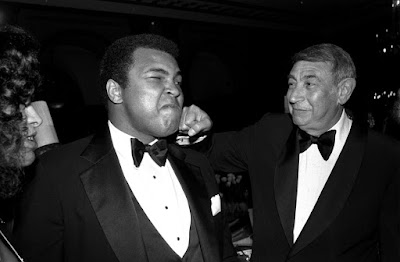 The day last week when Muhammad Ali passed I casually mentioned to a friend "Oh, I Met Him Twice".
My friend stopped eating lunch and glared at me.
"You must be awfully proud?"
And I answered  truthfully "I never really thought about those two casual encounters."
The first was in June 1974 at the Century Plaza hotel, venue for the twice annual Television Critics Association  junkets.
And there I was in the ballroom of the hotel lunching with --now get this --Howard Cosell.
Cosell liked me and remembered me from the 1972 junket to Pebble Beach where we had sort of played golf.
I had let him win easily which he boasted about all day.
So two years later he spotted my name on the list of TV invitees and I got to sit beside the Great One.
Up close and personal Cosell was something else.
His toupee looked pasted on, he wore heavy TV makeup because he said he had come from an ABC-TV taping.
We chatted about this and that and then the doors flew open and who should stride in but Muhammad Ali.
The TV critics stopped chattering. Silence ensued.
And Ali walked right over to Cosell's table and started playfully shouting.
"Cosell, I made you and I'm gonna break you.
"Cosell I'm prettier than you are."
Cosell : "Heck anybody is prettier than me."
Ali: "Cosell who is the greatest in the world?"
Cosell" "Frazier."
Ali: "Cosell your day is done."
Cosell":"My soup is cold."
And then Ali exited the other set of doors shouting "Cosell, my hair is real."
Cosell sat there grinning like a Cheshire cat.
And then he said "Ali is right. I made him and he made me."
When Cassius Clay changed his name to Muijammad Ali other broadcasters refused to address him as such.
"I respected what he was standing for and I always called him Ali after that," Cosell told me.
"When he refused to fight in Vietnam I understood completely."
"TYherte is always a sparkle in his eyes when we meet. He knows I'll always give him a fair shake."
In 1992 a visibly aged Cosell came out of retirement to salute Ali on his 50th birthday and Ali smiled for the first time that night.
Together they constituted the oddest couple in TV history and both knew it.
Imagine my shock a short five years later in 1979 when ushered into Ali's suite at again the Century Plaza hotel.
Ali had switched to acting and was starring in a TV movie opposite Kris Kristofferson titled Freedom Road. Based on the Howard Fast book it was intended by ABC to be the next Roots.
But what U.S.  TV critics and I saw was a very different man.
He spoke so slowly he could scarcely be heard.
One hand visibly shook.
There were stories somebody had dubbed large swathes of dialogue because it was so hard to understand him..
Was it Rich Lyttle who had also dubbed Jimmy Cagney and David Niven?
Ali said a few pleasantries but was visibly shrunken and shuffled like an old man.
I felt terribly sad and did not mention his diminished appearance in the column I filed.
And that was that.
So there you have it --my two encounters with Muhammad Ali.
And I remember both 40 years on --my contacts with one of the truly greats of our age.