Up In Arms: A Gem Of A Documentary 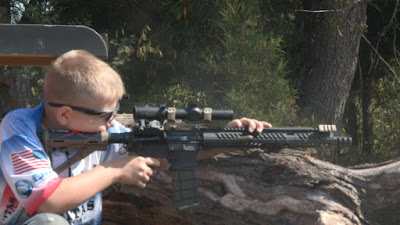 When a copy of a new TVO documentary was sent to me in late August I somehow found reasons not to watch it.
Then I noticed the name of the film maker --Nadine Pequeneza (15 To Life, Bomb Hunters)  --and curiosity got the best of me.
I can now report Up In Arms, a stinging commentary on the ominous transition to a gun culture in Canada is must viewing.
One of its strengths is the unusually long length --for contemporary Canadian television.
At 75 minutes it is by far too long for a CBC hour long slot (44 minutes plus 16 minutes of commercials).
So although I believe it is deserving of a national TV network slot I'm still grateful for TVOntario for showing it completely uncut.
You can watch it on TVO Wednesday September 23 at 9 p.m. Got that?
After watching I now believe this is the most important TV show to watch before deciding how you'll cast your ballot in the upcoming federal election --forget those silly and staged leaders' "debates".
My first reaction was one of complete surprise.
I had absolutely no idea the gun lobby was so powerful here --and it is growing by leaps and bounds.
First shock: there are 10 million privately owned guns in Canada.
I had to stop the tape and think about that for a few moments.
Pequeneza has done her homework, yes, and she has a definite point of view.
There's none of that balanced on-the-one-hand and on-the-other-hand.
At the same time she's very fair to everyone concerned.
She goes to gun shows and gets the points of view of the militant gun fanatics. She paints them as concerned and often very loquacious in defense of what they consider their rights.
She follows Tony Bernardo, executive director of the Canadian Shooting Sports Association who is very well versed and hardly a fanatic.
We see how he is trying to get the new gun control act Bill C-42 through Parliament --ironically it is due tro come to a crucial debate just as Parliament is hit by a mad gun man.
Just as compelling is John Evers, Ontario Regional Director for the CSSA.
And considerable time is spent at the gun store run by grandmotherly Pauline Langois whose store Al Simmons Gun Shop has been in the same location for 40 years.
Balanced against these scenes are the ominous feelings of police chief Bill Blair who makes some great points about getting local initiatives started to keep teens off guns.
We get to know 18-year old Alex who grew up in Regent Park, did drugs in the lobby and on stairwells, in a gun culture made possible by illegal guns imported from the U.S.
Strangest scenes? The comments of a convicted U.S. gun smuggler now in a U.S, penitentiary who describes how he got his gun cargoes across an increasingly porous boundary.
The best thing about Pequeneza's approach is her slow, methodical style that gets us right into the debate and her refusal to go for quick fix answers.
She keeps us watching with fine editing and camerawork and her instinctive feeling for what makes the best camera shots.
The new TV season is only just beginning but I'm betting Up In Arms will be a contender for all kinds of awards by season's end.
UP IN ARMS PREMIERES ON TVONTARIO WEDNESDAY SEPTEMBER 23 AT 9 P.M.
MY RATING: ****.

Many Americans have as many as 3 guns each. What very few Canadians know is that there are over 3 MILLION dual-citizen Americans registered in Canada, who own, control, and run everything in Canada. The current Mayor of Vancouver, one of Canada's biggest cities, is one of those Americans. I'll bet most of the privately owned guns in Canada are owned by those Americans, who have pretty much completed the "Americanization" of Canada till today there's hardly little left of what used to be - Canada.