Great News: Sunnyside Is Back 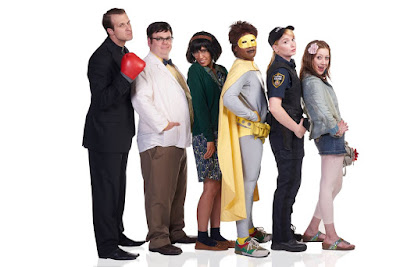 Best news of the new season is the return to form of the often brilliant Canadian sketch comedy show Sunnyside which revs up Sunday September 6 on City-tv at 8 p.m.
City is using a technique called "hammocking" meaning the newbie sketch series get hammocked between two ratings winners.existing
First up at 7:30 there's the sixth season premiere of Bob's Burgers.
And then at 8:30 it's Andy Samberg's returning third season hit Brooklyn Nine-Nine.
Sunnyside is made in Winnipeg and reverts to a form that long used to dominate Canadian TV: sketch comedy.
When it first premiered last January I was able to chat up co-creator Gary Pearson (This Hour Has 22 Minutes) --he teamed up with comedy veteran Dan Redican (The Kids In The Hall) and the result was serendipitous.
The show has a very strange logic --nothing makes sense but then everything does.
And the cast of up and coming comics are tops --all play multiple roles and boy are they hilarious at times.
My own personal laugh meter was buzzing through the two new episodes which I previewed.
The sketches are shot in a Winnipeg neighborhood called Sunnyside --instead of studio decor the reality of the surroundings adds depth to the comical proceedings.
The stars are Pat Thornton (satisfaction), Patrice Goodman (Platinum), Alice Moran (Too Much Information), Kevin Vidal  (Second City Mainstage) and Rob Norman (Versus Valerie) , all of them capable at sketch comedy which isn't the easiest form to master.
The entire show is certainly scripted but the improvisational skills of the co-stars often shred these playlets to shreds.
Premiering at mid-season the series was able to build some momentum --the initial order was for six episodes and this season there'll be all new episodes.
Look, I have no idea why the networks allowed that Canadian staple, sketch comedy,  to perish.
Here was one of the most inexpensive of series concepts.
Sure, I was on the set of Royal Canadian Air Farce which CBC moguls should never have allowed to die off as a series.
And then there was SCTV.
And The Frantics.
And Kids In The Hall.
None of them were exceedingly expensive to make. But when CBC closed down RCAF that meant the end of CBC-TV's fabled costume department which was sold off by pieces.
Costumes are a must when one is piloting a new sketch comedy series.

I'd agree with other reviewers that Sunnyside sports great potential --there's more than a little bit of  Monty Python.
In one new skit a goofy dad keeps pranking his son even after he manages to kill himself in one stunt but come back as a ghost  --and the kid is infuriated his dog crossed over, too.
A skit about a punch drunk priest works precisely because it makes no sense.
Then there's the guy who has to say to each new female patient: "Just because I'm a male nurse I'm not gay."
At a party guests watch the couple of the home battle over possession of a beautiful but dumb lizard.
My favorite line so far:"Look do you want a ride to dialysis or not?"
After watching these two new episodes I only haver opne additional commernt.
More please!
SUNNYSIDE, SEASON 2, PREMIERES ON CITYTV SUNDAY SEPTEMBER 27 AT 8 P.M.
MY RATING: ***1/2.

I'm so happy this show got renewed. Just saw the newest episode tonight and it was hilarious. The favourite was the ongoing war in Sunnyside complete with at least one feral pony joining sides.