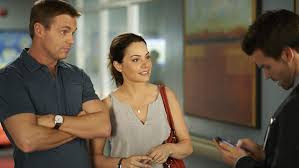 Last season's finale on CTV's Saving Hope literally ended with a bang --and the death of one of the stars Dr. Joel Goran played by charismatic actor Daniel Gillies.
On Thursday September 23 at 9 p.m.  CTV 's Saving Hope returns for its fourth season.
When I chatted on the phone with the other two personable stars, Erica Durance and Michael Shanks, they swore they did not see the shocking death was coming.
In a statement released to press at the time wily executive producer Ilana Frank said that deciding to kill off Dr. Joel was "an incredibly difficult decision to make."
On series TV death is a way of life.
My old Toronto friend, the late great actress Susan Douglas told me of the time in 1952 when she was starring in the daily CBS soap The Guiding Light and she rushed in to tell show creator Illana Phillips. she was pregnant and might need some time off.
"She was mortified and send my character to her death under a bus the very next week."
After six on M*A*S*H Maclean Stevenson decided in 1978 he wanted to jumpstart his own career as a TV series star.
So the producers arranged for his character Lt. Col. Henry Blake  to be helicoptered out in the last episode of the second season.
What they did not reveal to Stevenson was the additional of a final bumper --informing viewers Henry had crashed to his death.
That way Stevenson could never return to M*A*S*H --and by the way he made several stinker series that quickly flopped.
"We never saw it coming. Nobody did. Daniel certainly did not know in advance," Durance is telling me.
But that's series TV --the show goes on and the Durance-Gillies love affair was beginning to pale.
The new fourth season will see several new doctors introduced.

But what about Dr. Joel returning as a ghost?
It's that ghost theme that attracts some viewers and irritates others.
Meanwhile the first two episodes of the fourth season are as usual well plotted and acted. I'm honor bound by my TV critics' oath never to betray plot details.

Durance was pregnant last season in real life as was her TV character.
Both Shanks and Durance are B.C. based meaning their families are 3,000 miles away.
Shanks says he has young children in school so he flies home some weekends (he shoots most of the summer anyway).
Durance says she has an understanding family--but work is work.
One thing about this duo --they actually like each other which is rare on long running TV series--they met when Durance was a guest star on Shanks' Stargate series.
When I was on the set of Remington Steel I notice the two co-stars never spoke to each other.
"I know all about the rigors of series TV," Shanks tells me.
He served 10 years of various Stargate series shot in Vancouver.
Durance made a name for herself on Smallville also shot in B.C.
I also like Shanks' turn in the Gordie Howe TV movie --but he didn't sport the facial scars of the real Gordie.
Durance made a name for herself on Smallville nicely cast as Lois Lane (also shot in B.C.). Will she make a guest appearance on the new Supergirl series? I hope so.

Another problem faced by series veterans: keeping the stories fresh. Medical shows also run out of diseases.
Last season Saving Hope notched an average of 1.34 million viewers a week making it in Canadian terms a sturdy hit.
"We do make suggestions about plot lines," Durance says and there are friendly chats with the writers.
I remember being on the Matlock set and watching star Andy Griffin rewrite scenes with a pencil because he felt his character deserved more.
When NBC quickly dumped the show in the U.S. there was a feeling CTV might do the same.
Instead the network offered support and was rewarded with a sturdy perennial that might even last beyond this season.